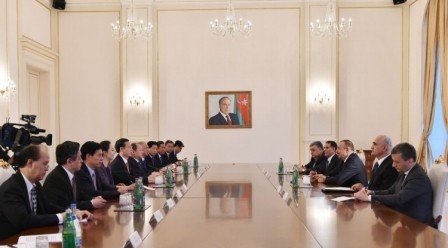 President of the Republic of Azerbaijan Ilham Aliyev has received a delegation led by member of the Standing Committee of Central Politburo of the Communist Party of the People's Republic of China, Senior Vice Premier of the State Council Zhang Gaoli.

Welcoming the guests in Azerbaijan, President Ilham Aliyev expressed his confidence that this visit would contribute to the development of friendly ties and cooperation between the two countries. "We attach great importance to developing our relationship with the People`s Republic of China," said the head of state, recalling his state visit to China that took place late last year. President Ilham Aliyev underlined the significance of the talks held and documents signed during the visit for the future cooperation. Saying that Azerbaijan and China enjoyed excellent political ties, the President pointed to the development of the bilateral cooperation in economic, humanitarian, energy, transport and other areas. The head of state described the visit of the Chinese delegation as another step toward the expansion of the friendly ties.

Member of the Standing Committee of Central Politburo of the Communist Party of the People's Republic of China, Senior Vice Premier of the State Council Zhang Gaoli hailed their visit to Azerbaijan. He said that prior to heading to Baku he met with President of the People`s Republic of China Xi Jinping, and extended his best regards and greetings to the Azerbaijani head of state. He said Xi Jinping regarded Azerbaijan as an important and friendly country for China. Saying that he was deeply impressed by development processes taking place in Baku and the city`s beauty since the first minutes of his arrival, Zhang Gaoli said Baku was a model of harmony of history and modernity in terms of urban planning. He said that under President Ilham Aliyev`s leadership Azerbaijan was rapidly developing and the people`s well-being was being improved.

The Vice Premier of the State Council of the People's Republic of China also noted: "We will encourage Chinese companies to invest in Azerbaijan's economy."

President Ilham Aliyev described the fact that high-level Chinese delegations had visited Azerbaijan in a short space of time as a good indicator of the bilateral ties, adding that the development of relations with China was among key foreign policy priorities of Azerbaijan. The head of state said Azerbaijan considered a dialogue partner status granted by the Shanghai Cooperation Organization as the first step toward full integration into the organization, and added that cooperation with this organization occupied an important place in Azerbaijan`s foreign policy. President Ilham Aliyev said Azerbaijan put a special emphasis on its cooperation with China in combating terrorism and extremism. The head of state expressed Azerbaijan`s interest in working with China to create and develop the Silk Road infrastructure. The President said Azerbaijan was ready to play a vital transit role in the transportation of Chinese products to Europe and vice versa.

"Work continues to build the railway in the country, the largest sea trade port in the Caspian basin, and to establish a free economic zone here. Azerbaijan is interested in Chinese companies` active involvement in this process. The head of state said Azerbaijan welcomed the Chinese investments made in different areas of economy. President Ilham Aliyev said Chinese firms were successfully involved in Azerbaijan`s construction sector, and underlined the existence of good potential for cooperation in the fields of tourism, culture, energy, transport, high technologies, agriculture, communication and information technologies, and others. President Ilham Aliyev congratulated China on its strides in a variety of areas.