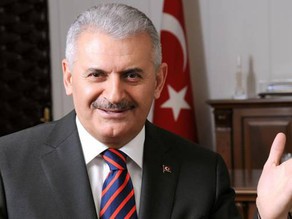 The newly-appointed Prime Minister of Turkey, Binali Yildirim has arrived with an official visit to Baku.

The distinguished guest was met at the Heydar Aliyev International Airport by officials of the country and the staff of the Turkish Embassy in Azerbaijan.

During the visit Mr. Yildirim is to hold meetings with the Azerbaijani leadership and discuss the development of bilateral relations, as well as hold an exchange of views on important regional and global issues.

Notably, B.Yildirim was elected the chairman of the ruling Justice and Development Party of Turkey (AKP) at a congress on May 22. Then R.T.Erdoğan has given mandate to B.Yildirim to form the Turkey's 65th Cabinet.

Traditionally, with his first foreign visit the Turkish Prime Minister heads for the Turkish Republic of Northern Cyprus and Azerbaijan.