Russia is a neighbor and friend of Azerbaijan 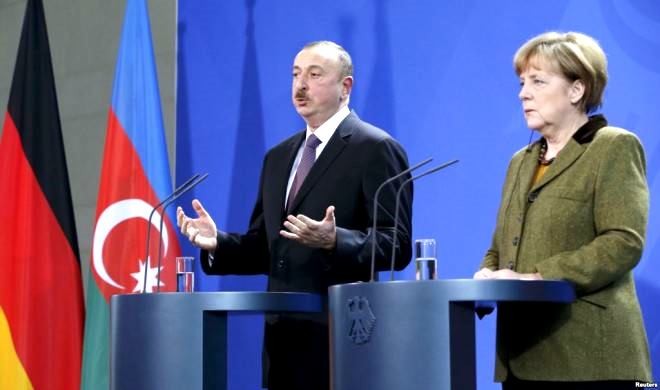 Russia is a neighbor and friend of Azerbaijan, and the two countries enjoy good and constructive relations, said Azerbaijan’s President Ilham Aliyev.

He made the remarks during the joint press conference with German Chancellor Angela Merkel in Berlin on June 7.

Azerbaijan and Russia have also good relations in the fields of security, transport and trade, President Aliyev said, noting that Azerbaijan sees Russia as a strategic partner.

The Azerbaijani president noted that unlike Armenia, Azerbaijan pays money for the acquisition of weapons.

“Azerbaijan buys weapons not only from Russia, but also from Turkey, Israel, Belarus and Iran. We should provide our armed forces with sophisticated weapons as a state that is suffering from occupation and located in complicated geopolitical configuration,” Ilham Aliyev said.

Russia is one of the OSCE Minsk Group co-chairing countries, he said adding that Azerbaijan commends Russia’s role within the framework of the Minsk Group.

President Aliyev expressed hope that Russia, France and the United States, using its full potential, will persuade Armenia to withdraw its forces from the occupied Azerbaijani territories.