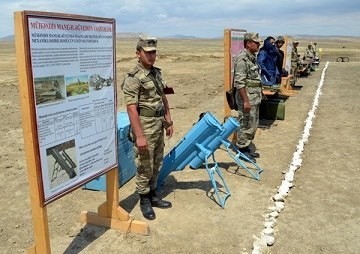 In accordance with the plan approved by Azerbaijan’s Defense Minister, Colonel-general Zakir Hasanov, an exercise has been conducted to check the combat readiness of engineering and fortification forces of the country’s Armed Forces.

The exercises was aimed at checking abilities of command and units in connection with the engineering support during the difficult combat operations, improving the level of combat readiness of the personnel and testing the ability to asses the situation and make a reasonable decision in accordance with the current situation, as well as improving the morale of the personnel during the execution of engineering maintenance tasks, the Defense Ministry informed on June 11.

According to the plan, the military unit has been fully alerted and given necessary tasks. Personnel were acquainted with modern equipment newly included in the disposal of engineering and fortification forces. The units successfully carried out practical problems and their actions were highly appreciated.

The military servicemen distinguished during the exercise were awarded.