In April fighting, we witnessed power of our army 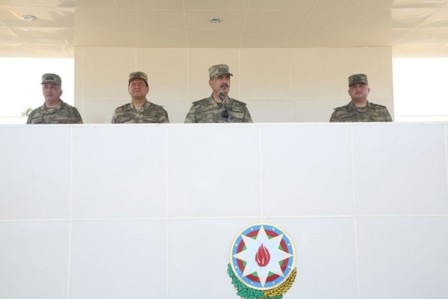 The leadership of Azerbaijan’s Defense Ministry has attended the opening of a new military unit near the front line, visiting the headquarters, barracks, dining room, boiler room-laundry complex, grocery store, medical center, and other facilities in the area, the ministry’s press service informed.

Defense Minister Zakir Hasanov gave a speech before the military personnel, noting that the Supreme Commander-in-Chief of the Armed Forces has carried out reforms in all directions, which have already come to fruition.

The Azerbaijani Army is equipped with the most modern weapons, ammunition, and military hardware made in leading states, said Hasanov, stressing that the social base of the Armed Forces is getting stronger, new military settlements are being created.

“All the necessary conditions are provided for them to serve at a high level. We have already opened several military units this year. These are all part of the efforts we make in order to prepare our Armed Forces to liberate our lands from occupation,” he said.

“During the liberation of a part of our lands from occupation in April, we witnessed the fighting spirit, combat skills, and power of our Armed Forces. Mr Supreme Commander-in-Chief has said many times that “we must not allow a second Armenian state to be created in our land.” And we will do our utmost to liberate our lands from occupation and justify the confidence of the president and the people of Azerbaijan,” Hasanov added.