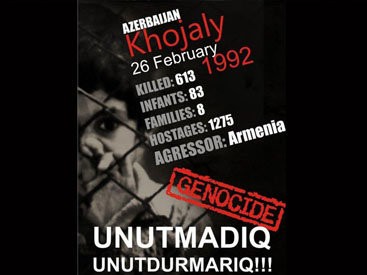 Khojaly is a small town where population consisted mainly of Azerbaijanis. It is located in Azerbaijan, near the border with Armenia.

From the very beginning of the Armenian-Azerbaijani Nagorno-Karabakh conflict in the beginning of the 20th century, Armenians have been making plans to occupy Khojaly because of its strategic importance. One of the main reasons being the only operational airport in that region was located in Khojaly in 1990’s. The other importance of Khojaly is that the city represented one of the major settlements in Karabakh, mostly populated by Azerbaijanis. The population counted for over 6,000 at the beginning of the conflict.

Starting from the late 80s, Khojaly was located around nine kilometers north-east of Khankendi (before the collapse of the Soviet Union this town was named Stepanakert in honor of the revolutionary Bolshevik and leader of the Baku Commune Stepan Shaumyan) and other Azerbaijani-populated areas in Nagorno-Karabakh became the second home for Azerbaijanis that had been expelled from Armenia. Considering that in 1991 Khojaly was populated by 6,300 people, by February 1992, according to British journalist Thomas de Waal, only around 3,000 civilians resided in the town.

According to the investigation by the international human rights organization Human Rights Watch, during winter of 1991-1992, Khojaly suffered from regular Armenian attacks in a form of shelling, mainly at night time. During this investigations, HRW had found that shelling mainly aimed civilian targets resulting in large numbers of civilian casualties.

Upon a complete air and land blockade of Khojaly by the Armenians, helpless residents were imminently attacked. The attack began on the night of 25-26 February with heavy artillery fire.

After shelling of civilians by the Armenians supported by the CIS 366th motorized infantry regiment stationed in Khankendi (Stepanakert), the troops entered the town. According to witnesses, personnel and military equipment of the 366th Regiment took an active role in the assault and capture of the town, which was surrounded from the three sides when the army advanced into the town. İts also important to note that the representatives of the current Armenian government such as President Serzh Sargsyan and Defense Minister Seyran Ohanyan have been leading the assault and invasion of Khojaly.

Under the shelling, Khojaly residents were forced to leave the town. They fled from their homes, many without shoes or warm clothes and walked across the snow-covered terrain. Many people died from frostbite trying to escape from Armenian butchers. HRW reports that the Armenian armed forces and military personnel of the 366th motorized infantry regiment under the command of George Zarvigorov opened fire on people leaving the city. During the shelling, many civilians were killed. Armenians fired indiscriminately - they tortured, slashed and stabbed those who survived shelling.

There were still civilians in Khojaly who were unable to leave their homes. These people were taken captive and sent to Khankendi (Stepanakert), which was under the Armenian control.

The Armenian atrocities in Khojaly are a clear demonstration of the utopic Armenian idea of creation of the "Great State of Armenia" by the means of ethnic cleansing at the territories that had been internationally recognized as Azerbaijani lands. Importantly to note the hostages taken by Armenians had mainly been Azerbaijani women, children and elderly people. There are recorded facts that some captives were subjected to severe physical violence and deprived from medical care and proper nutrition. Others have been exploited as slaves by the Armenian families. There were also Azerbaijanis that had been killed or died, unable to withstand the systematic torture and beatings.

The Armenian authorities hid some prisoners from international observers, obviously in order not to disclose the realities of brutal violence and sophisticated torture of Azerbaijani prisoners.

The victims of ethnic cleansing in Khojaly are:

Despite the declared readiness of the Armenian side to return captive Khojaly civilians (women and children) to the Azerbaijani side, in fact, it has never been materialized so far.