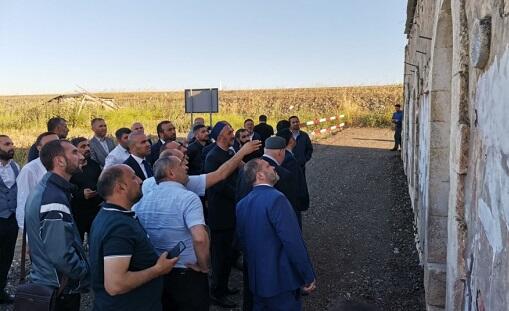 A delegation of Georgian clerics, who arrived in Azerbaijan with the support of the Azerbaijani Embassy in Georgia and the Georgian Representation of SOCAR, visited the liberated Fuzuli region.

Axar.az informs that the participants first got acquainted with the Armenian barbarism in the village of Merdinli.

It was reported that Armenian vandals looted the village for 27 years and wiped it off the face of the earth. All houses and social facilities were destroyed, farms were destroyed. The enemy used the mosque in the village of Merdinli as a cattle barn to demonstrate its hatred of Azerbaijanis. The village cemetery was also vandalized by Armenians - graves were destroyed and gravestones were blown up.

The delegation also arrived at Fuzuli International Airport. It was noted that large-scale construction work is being carried out by Azerbaijan on the lands liberated during the 44-day Victory March. As part of this work, an international airport was built in Fuzuli in a short time. All the work done here was carried out in accordance with international norms and standards. The airport now accepts planes from abroad.

Georgian guests also witnessed Armenian atrocities in the center of Fuzuli. It was reported that the city was completely destroyed, along with residential buildings, historical and cultural monuments were destroyed. The city's nature, trees and greenery were also destroyed.

The guests got acquainted with the Armenian barbarism in Fuzuli and left for Shusha.