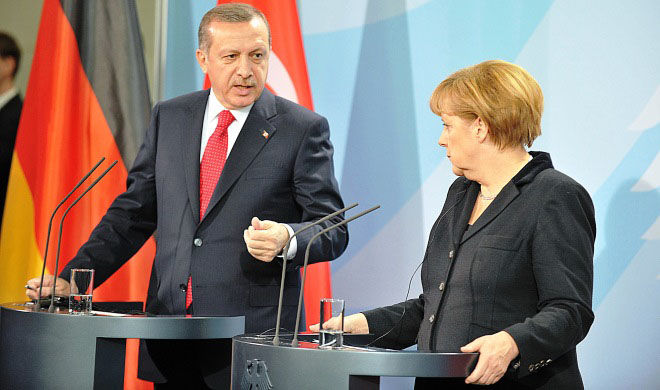 German Chancellor Angela Merkel told parliamentary members of her conservative Christian Democrats on Tuesday that she opposed opening new negotiations with Turkey as part of its quest to join the European Union.

That means the discussions are effectively over, the newspaper reported in Wednesday editions, citing sources who participated in the party meeting.

Merkel recommended spelling that out to voters who asked about the party's position on Turkey, the newspaper said.

Turkish President Tayyip Erdogan on Tuesday said his country has not yet "closed the book" on the EU after the European Parliament recommended freezing accession talks last week, but said Ankara had other options with other partners.

The European Parliament last week voted 479 to 37 for a non-binding motion to temporarily halt membership talks with Turkey because of its "disproportionate" reaction to the failed July 15 coup.

German officials have been critical of Erdogan's crackdown on dissidents and journalists after the coup attempt, although Merkel - mindful of the millions of refugees still living in Turkey - on Friday underscored the need for both Turkey and the EU to honor their commitments to each other.

Erdogan has suggested that he might scrap a deal to keep hundreds of thousands of migrants inside Turkey's borders in return for the promise of accelerated EU membership talks, visa-free travel for Turks in Europe and financial aid.

Turkish authorities have detained or dismissed more than 125,000 people - including soldiers, academics, judges, journalists and Kurdish leaders - over their alleged backing for the coup, in what opponents, rights groups and some Western allies say is an attempt to crush all dissent.