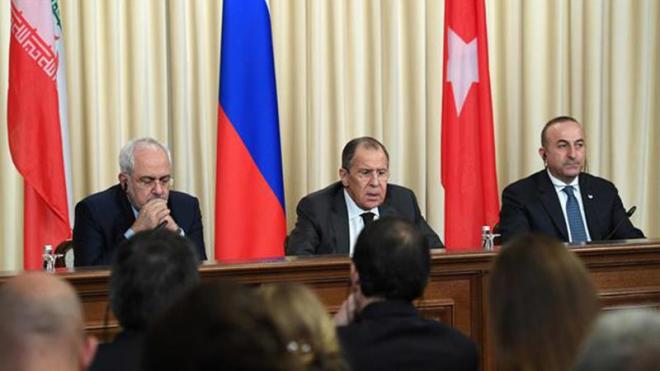 Russia, Iran and Turkey agreed on Tuesday to guarantee Syria peace talks and backed expanding a ceasefire in the war-torn country, laying down their claim as the main powerbrokers in the conflict.

"Iran, Russia and Turkey are ready to assist in preparing the agreement in the making between the Syrian government and the opposition and to become its guarantor," Russian Foreign Minister Sergei Lavrov said in Moscow, citing a joint statement.

"The ministers agree with the importance of widening the ceasefire, of free access for humanitarian aid and movement of civilians on Syrian territory."

The foreign and defence ministers from Russia, Iran and Turkey met in Moscow on Tuesday, the day after Russia's envoy to Ankara was shot dead in the Turkish capital by a gunman shouting about Syria and Aleppo.

Russia and Iran are on the opposite side of the Syrian conflict from Turkey, with Moscow and Tehran backing President Bashar al-Assad and Ankara supporting those seeking to topple him.

But Turkey and Russia have recently started working closely together to evacuate rebel fighters and civilians from war-battered Aleppo under a complex deal.

Lavrov praised the Turkey-Iran-Russia format on Syria as the "most effective" and added that the three have "confirmed their readiness to fight the Islamic State group and al-Nusra front and to separate them from the groups of armed opposition."

"Our cooperation has already allowed not just the evacuation of civilians but also an organised moving out of most of the fighters of the armed opposition along agreed routes," Lavrov said.

"We agreed to continue building further cooperation, based on the statement we agreed today," he said.

Pointedly absent from the discussion was the United States and Lavrov took a swipe at Washington by claiming that it had been unable to make good on previous deals reached in Syria.

The Red Cross on Tuesday said that at least 25,000 people have left the eastern districts of Aleppo since evacuations began last week, and Lavrov said the process should be completed in two days at most.

"Right now the evacuation is wrapping up," he said. "We hope that this is a question of one or a maximum of two days."