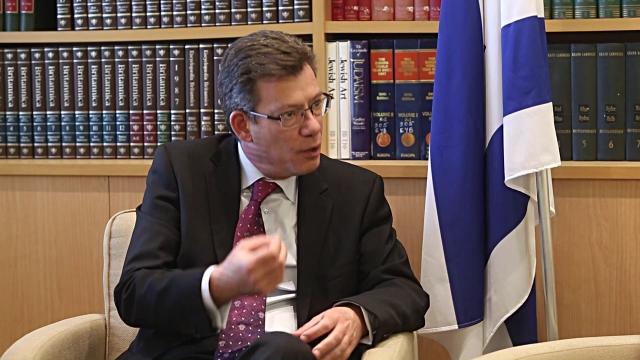 Israeli Prime Minister Benjamin Netanyahu has ordered his nation's Foreign Ministry to temporarily limit all working ties with the embassies of the 12 UN Security Council members who voted in favor of Friday's resolution on West Bank settlements and who have diplomatic relations with Israel.

The officials said that business with the embassies of those countries -- Britain, France, Russia, China, Japan, Ukraine, Angola, Egypt, Uruguay, Spain, Senegal and New Zealand -- will be suspended, the officials said.

Netanyahu will not meet with the foreign ministers of those countries and their ambassadors will not be received at Israel's Foreign Ministry, the officials added.

In addition, travel by Israeli ministers to those countries will also be limited, the officials said, noting that Israeli ambassadors in the countries will still be able to continue working with the governments of their host nations.

The move came after ten ambassadors were summoned, under orders by Netanyahu, to the Foreign Ministry for a personal rebuke over the vote. Israel was furious at the passage of Security Council resolution 2334, which says its settlements in the West Bank "had no legal validity, constituting a flagrant violation under international law and a major obstacle to the vision of two States living side-by-side in peace and security." The United States, a Security Council member, abstained on the resolution.

More than anything else, the diplomatic move to suspend embassy ties is a statement meant to express Netanyahu's anger at the countries that voted for the resolution. It is unlikely to have any practical effect on either Israel or the other countries, as it does not affect trade, security coordination, or other aspects of the relations.

But as a statement, it is significant, and it is a continuation of Netanyahu's diplomatic actions against countries that voted for the resolution.

Notably, it does not affect diplomatic relations with the United States, which has been the focus of much of Netanyahu's anger. Netanyahu summoned the US ambassador and launched a scathing attack Sunday on the Obama administration.

Late Monday afternoon Israel's ambassador to the US, Ron Dermer, explained his country's diplomatic moves to CNN's Jake Tapper on "The Lead."

"Israel's not going to be kicked in the teeth and not just respond to this," Dermer said. "We can't just meet with visiting dignitaries as if nothing has happened. This is a serious effort against Israel."

"The one negotiating chip that we have at the peace table is that territory. If the UN Security Council says that territory actually belongs to the Palestinians -- which it does not and which we reject -- that's going to make achieving peace actually much harder."