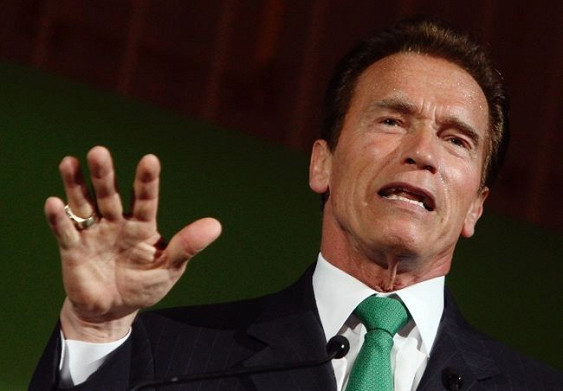 Fans of Celebrity Apprentice are about to lose the show's biggest asset as Arnold Schwarzenegger will not be returning to host another season of the show. "I learned a lot, I had a great time, it was a really great opportunity," Schwarzenegger said, speaking exclusively to Empire. "But under the circumstances I don't want to do it again."

Talking to Schwarzenegger about his role in upcoming drama Aftermath, Empire mentioned the ailing reality show and a recent report by The Wrap that both viewers and sponsors have been departing in droves. Schwarzenegger confirmed the story and claimed that Donald Trump is to blame.

"It's not about the show," he explained. "because everyone I ran into came up to me and said 'I love the show... but I turned it off because as soon as I read Trump's name I'm outta there!'"

"NBC did everything they could to promote the show and [producer] Mark Burnett did a fantastic job. No one really knew that this was going to happen and I think that everyone was caught off guard."

"When people found out that Trump was still involved as executive producer and was still receiving money from the show, then half the people [started] boycotting it."

Social media campaign #grabyourwallet appears to have been a factor, imploring consumers and sponsors alike to ditch Celebrity Apprentice in direct response to the US President's continued involvement. The boycott's success may well be reflected in the show's viewing figures and the hasty retreat of commercial backers.

"Even if asked [to do it again] I would decline." Said Schwarzenegger. "With Trump being involved in the show people have a bad taste and don't want to participate as a spectator or as a sponsor or in any other way support the show. It's a very divisive period now and I think this show got caught up in all that division."