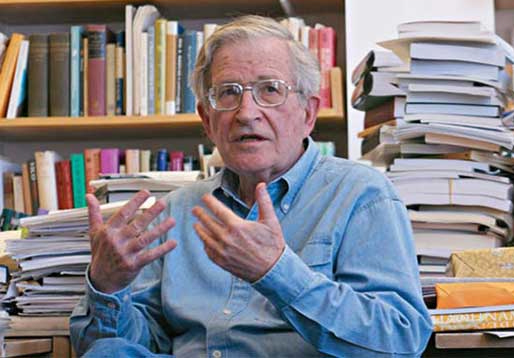 The US Republican Party is “the most dangerous organisation in human history”, Noam Chomsky has said.

Axar.az reports that the academic and author made the claim during an interview with the BBC.

Asked by Newsnight host Evan Davis whether the party was really worse than an organisation like Isis, the author and academic replied: “Is Isis dedicated to trying to destroy the prospects for organised human existence?

“What does it mean to say not only are we not doing anything about climate change but we’re trying to accelerate the race to the precipice?

“It doesn’t matter whether they genuinely believe it or not… if the consequence of that is ‘let’s use more fossil fuels, let’s refuse to subsidise developing countries, let’s eliminate regulations that reduce greenhouse gases’. If that’s the consequence, that’s extremely dangerous.”

The academic has previously claimed the Republicans are “overwhelmingly” committed to destroying human life on earth.

Asked about the consequences of Donald Trump’s presidency, Mr Chomsky replied: “The main damage he’ll do is to the world, and it’s already happening.

"The most significant aspect of the Trump election – and it’s not just Trump, it’s the whole Republican Party – is their departing from the rest of the world on climate change.

“It’s a crucial issue. It’s an existential threat. Now we have this astonishing spectacle of the United States alone in the world, not only refusing to participate in efforts to deal with climate change but dedicated to undermining them.

“It’s not just Trump - every single Republican leader is the same…In the Republican primaries, every single candidate either denied that climate change was happening or, when you get to the so-called moderates like Jeb Bush or [John] Kasich, they say ‘well maybe it’s happening but we shouldn’t do anything about it’. It’s 100 per cent refusal.”

Explaining the popularity of Mr Trump to US voters, the academic said: “The Democrats gave up on the working class 40 years ago. The working class is just not their constituency.

“The Republicans claim to be but they’re basically their class enemy. However, they can appeal to people on the basis of non-economic claims about religion, white supremacy…identity politics.

“White supremacy is very deeply rooted in the United States… it ranks higher than even South Africa. There’s no doubt there was a racist motivation behind [Mr Trump’s victory].”