Venezuela braces for another round of rival protests 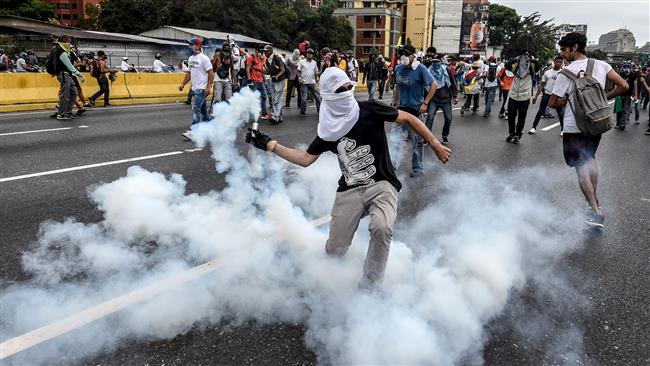 Venezuelans are expected to take to the streets nationwide on Saturday, less than a week after power outages left many without basic services and water.

US-backed opposition leader Juan Guaido, who declared himself interim president in late January, called on his supporters to gather in the capital Caracas and different areas around the country to protest against President Nicolas Maduro and the "tragic" conditions plaguing the country. Guido and his supporters view Maduro's government as illegitimate.

"The call (to protest) is for April 6, across the country and in different points of the country. It's not just a protest to reject the situation we are going through but for a definite end to the usurpation," Guaido said on Thursday in the opposition-backed National Assembly.

"It would be a great show (of strength) from the Venezuelan people, that we will not get used to the tragic situation we are living."

Maduro's government, which accuses Guaido and the United States of attempting to stage of the coup, responded by calling for its supporters to march in Caracas.

Government supporter Julio Cesar Acevedo, 66, said he will attend Saturday's protest to "fight for the freedom of the country".

"We are tired of other countries trying to run over Venezuela, we want a free country, we don't want to kneel, we want to stand," Acevedo said.

Daxiq Mosquera, another government supporter, said Venezuelans must "march for the love of our motherland".

"If they go out, we go out too, the streets belong to the people, not to the opposition, and we go out for the empowerment of our country," Mosquera, 55, added.

But those who want to see Maduro go say the country is going "downwards".

"Could it be that the government is not seeing this crisis? Are they not seeing the levels of poverty that we have, the fact that people cannot afford food anymore? Don't they know?" asked 66-year-old Jose Espinosa.

"We need a change, we can't continue with a situation such as the one we are experiencing, without power, without water, this is not life," he told.

Other complained of the lack of opportunities inside Venezuela.

"I'm 27-years-old, and I can't buy a house, I can't have a job, I can't have a future, there are simply no opportunities, and people are afraid of going out to protest, this is horrible," Miguel, who wished only to go by his first name told.

Millions of Venezuelans have left the country in recent years, fleeing hyperinflation, unemployment and food and medicine shortages.