Jeyhun Bayramov is at the Ministerial Meeting 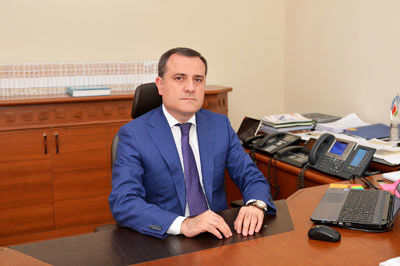 Axar.az reports that, according to the Foreign Ministry, at the initiative of Kazakhstan, which chairs the group of landlocked developing countries, "accelerated implementation of the Vienna Action Program during COVID-19 and sustainable development in landlocked developing countries" The opening session of the meeting was addressed by the Minister of Foreign Affairs of the Republic of Kazakhstan Mukhtar Tleuberdi, the President of the 75th session of the UN General Assembly Volkan Bozkir and the UN Secretary General Antonio Guterres. Representatives of 28 countries and international organizations took part in the general discussions of the event.

Speaking at the event, the Minister of Foreign Affairs of the Republic of Azerbaijan Jeyhun Bayramov informed the participants about the measures taken by Azerbaijan in the fight against COVID-19, as well as Azerbaijan's contribution to strengthening efforts in this regard at the global level. It was noted that during the pandemic, Azerbaijan did not stop the flow of supplies, attaching great importance to regional cooperation.

Minister Jeyhun Bayramov informed about Azerbaijan's intra-regional and inter-regional transport coordination projects, including major infrastructure projects aimed at increasing transit capacity throughout the Eurasian space, as well as modernization of the transport sector infrastructure in our country.