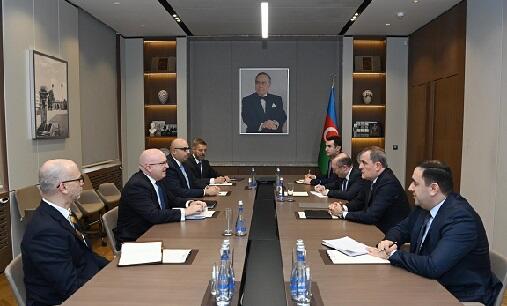 The Minister of Foreign Affairs of Azerbaijan, Jeyhun Bayramov, discussed the peace treaty with Armenia with Philip Ricker, the chief advisor for Caucasus negotiations of the US State Department.

During the meeting, the Azerbaijan-Armenia normalization process, the bilateral negotiations on the elements of the peace agreement, including the Washington meeting, and the issues arising from it, the current situation on the opening of communications and the delimitation process were discussed.

Within the framework of the tripartite statement, Minister Jeyhun Bayramov pointed out that Armenia has not yet fulfilled its obligations, has not fully withdrawn its forces from the territories of Azerbaijan, continues to threaten mines, and uses the Lachin road for military purposes contrary to its obligations. He emphasized that it is important to prevent the mentioned destructive steps. At the same time, the minister informed the other side about the views of our country on the issue of reintegration of Armenian residents living in Karabakh.