A frozen lake on Pluto 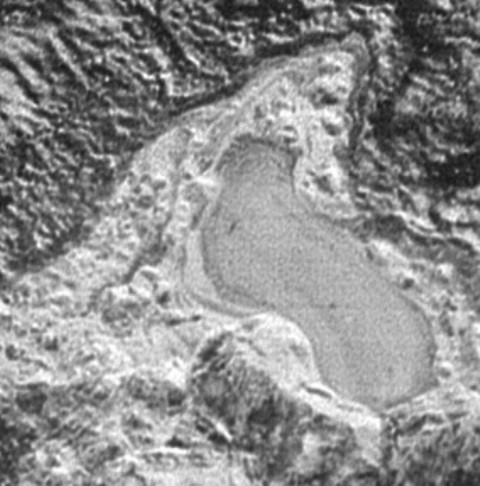 It's been several months since New Horizons made its historic flyby of Pluto, but the probe is still only halfway through transmitting the huge amounts of data it recorded at the time back to NASA headquarters.

Among the latest findings presented by the space agency this week is evidence suggesting that the frozen liquid nitrogen that covers much of the dwarf planet's surface might not always have been so icy still. NASA thinks changes in Pluto's atmospheric pressure over time could have resulted in this frozen mass thawing into flowing liquid in the past – a hypothesis supported by various surface details spied by New Horizons, such as this "frozen, pond-like feature just north of Sputnik Planum".

"Liquids may have existed on the surface of Pluto in the past," New Horizons Principal Investigator Alan Stern told the media. "We see what for all the world looks to a lot of our team like a former lake."

According to the scientists, the flat, featureless appearance of the object in the image below – which starkly contrasts with the jagged terrain surrounding it – makes it likely that we're looking at a lake of liquid nitrogen, frozen in place since a warmer chapter in Pluto's history.

"It's very smooth, as if a liquid has frozen across one height," Stern told New Scientist. "It's hard to come up with an alternate model that would explain that morphology."