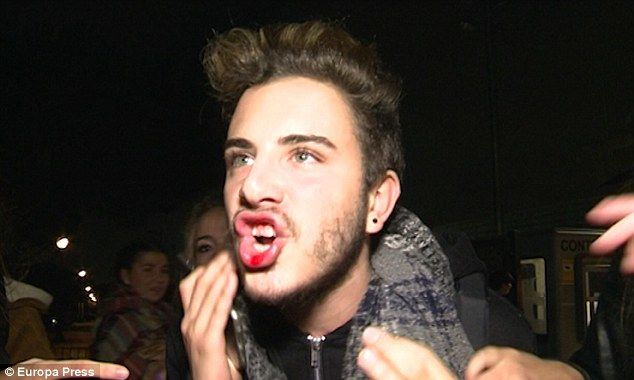 Justin Bieber has left a fan with a split and bloodied lip after throwing a punch at him while arriving for his concert in Barcelona.

New video footage appears to show the 22-year-old Canadian pop star hit the male through the open window of his car as he was driven by a chauffeur to the city's Palau Sant Jordi for latest stop on his Purpose tour.

The enthusiastic fan can be seen reaching out to touch the singer while the car rolls past at slow speed, but Justin reacts with a jab that makes contact with his face.

As the car drives away, the man is seen touching mouth in apparent shock before turning to face the camera and showing his bloodied lip.

A group of girls standing in his vicinity appear to be equally shocked as they notice that he is bleeding.

He is then seen spitting out some of the blood as his hand hovers over his mouth.

A representative for Justin Bieber has been contacted by MailOnline for comment.

The incident is the latest in a string of issues for the pop star, who famously got into an altercation with Orlando Bloom in the summer of 2014.

Justin and Orlando were with respective groups of friends at Cipriani restaurant in Ibiza before Troy star Orlando attempted to throw a punch at him.

The incident occurred after Orlando's dining partner Leonardo DiCaprio had proceeded to shoo away the pop singer with his hand, leading Justin to provoke a fight which saw Orlando jump over a sofa to get at the star.

The two men met by chance at the Spanish eatery - where Lindsay Lohan and Sean 'Diddy' Combs were also dining - but appear to have a common connection in Orlando's estranged wife Miranda Kerr.

Miranda - who recently got engaged to Snapchat CEO Evan Spiegel - is also the mother of Orlando's three-year-old son, Flynn.
One version of the event heard that Justin told Orlando he had slept with Miranda, whom he first met at a Victoria's Secret show in 2012, which prompted him to hit the singer.

Justin told Orlando to 'Say hi to Miranda for me!' just moments after the actor tried to punch him, one onlooker told MailOnline.

Following the altercation, Justin continued to provoke the actor by posting a picture of his former wife in a bikini with a crown symbol caption, followed by a picture of Orlando wiping his eyes as if to cry.

It was also claimed, though never confirmed, that Orlando had briefly dated Justin's ex Selena Gomez.

More recently, in June, the singer got into a physical showdown with somebody much less famous, though a lot bigger, when he reportedly picked a fight with 6ft 5in fan Lamont Richmond outside a hotel in Cleveland, Ohio.

According to Lamont, the group enjoyed a friendly chat with the Canadian star but the atmosphere changed when he asked Justin for a photo and an autograph.

Justin, who has previously explained he won't take photos with fans anymore because he feels like 'a zoo animal', allegedly snapped, telling the man: 'No autographs tonight, motherf*****.'

Lamont claimed to TMZ that the star smelled of alcohol, and was certain he could have 'killed' the 5ft9in singer if had gone 'full force.'
Video emerged showing the singer getting into a shoving match with the man who is twice his size, before deciding to really push the envelope and throw a punch.

Despite Justin's recent efforts to bulk up and grow a mustache, the star proved no match for his hulking adversary who, after recovering from the shock, bundled him to the ground with ease.

Earlier this year, Justin took to Instagram to explain his reluctance to pose for snapshots with fans, writing: 'If you happen to see me out somewhere know that I'm not gonna take a picture I'm done taking pictures.'

'It has gotten to the point that people won't even say hi to me or recognize me as a human, I feel like a zoo animal, and I wanna be able to keep my sanity. I realize people will be disappointed but I don't owe anybody a picture.'

He continued: 'And people who say "but I bought your album" know that you got my album and you got what you paid for AN ALBUM! It doesn't say in fine print whenever you see me you also get a photo.'

The same night as his latest apparent altercation, Justin was seen cuddling up to young devotees while reportedly visiting an optical store.

Hours before he was due to take to the stage at the city's Palau Sant Jordi, the Sorry singer - clad in a red tracksuit - was spotted embracing and taking photographs with a crowd of excited youngsters.

The star appeared to be in good spirits as he welcomed one fan after the other for the impromptu meet-and-greet session on the bustling streets.

Sources tell MailOnline that Justin was on his way to a local optician's store with a small group of handlers when he stopped to meet some of his fans.

When his tour made its way through Italy over the weekend, Justin lifted his short on stage to reveal that he'd had the words 'Son Of God' inked across his upper abs.

It has been reported that the star already has 56 tattoos - including a portrait of Jesus Christ on his leg, and many others that reflect his Christian faith.

In the past, he has commissioned celebrity tattoo artist JonBoy for his bodily inkings, but it is currently unknown who is responsible for his latest tattoo.

Justin performed via satellite at the American Music Awards on Sunday night.

The What Do You Mean singer won four American Music Awards this year, which makes him one of the top 10 AMA winners of all time.