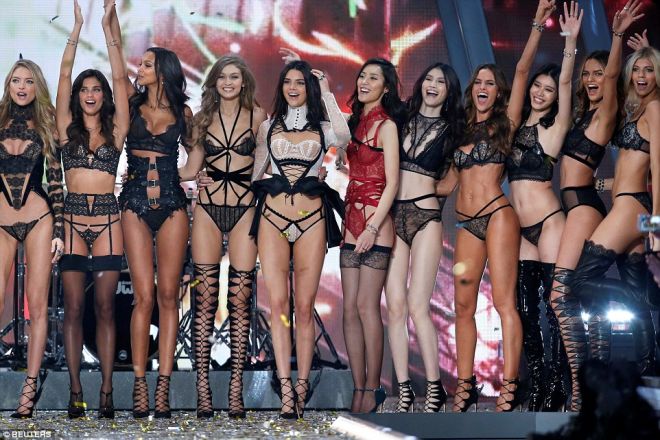 It is one of the most prestigious modelling gigs around the globe.

And Gigi, 21, and her sister Bella Hadid, 20, joined Kendall Jenner, 21, on the catwalk at the Victoria's Secret fashion show at the Grand Palais in Paris on Thursday night.

They joined Angel veterans Alessandra Ambrosio and Adriana Lima, both 35, as a spectacular parade of the world's top supermodels kicked off.

Gigi looked incredible wearing a very sexy one-piece which had criss-cross straps running throughout. She wore lace-up thigh-high boots and wore a giant pair of feathered wings on her back.

Her sister Bella flaunted her abs in an embellished crop top and matching briefs which she wore with a pair of red high heels, with plumes of ostrich feathers protruding from her shoulders.

She later changed into a grey lace underwear set which had a corseted detail at the waist as she walked down the runway while her recently ex boyfriend The Weeknd performed.

At first looking sultry as she made her debut for the brand, she broke into a smile, while her man carried on singing, seeming unable to take her eyes off him.

Wearing killer heels, her and Gigi's proud parents, Yolanda Foster and Mohammed Hadid were watching from the audience.
The pictures come a day after Bella was caught staring at a picture of herself kissing her former flame while sitting on a plane.

Meanwhile, Kendall also looked incredible as she walked for the show, for the second year running, having already achieved her wings.

She wore a spectacular white and black outfit which had a sexy maid feel to it, with those coveted black fluffy wings as she worked her magic.

Her skimpy underwear left little to the imagination and even her strappy heels had glamorous wings trailing off the back.

Earlier in the day, the models were pictured extensively backstage with sisters Bella and Gigi keeping close to one another.

Wearing matching pink robes, the girls no doubt supported one another as it was Bella's first time walking for the brand.

Gigi was involved in the show last year, so she must have had lots of advice to give her famous sibling.

As she chatted to vying reporters and photographers, her silken tresses were toyed with and styled - ready for her debut on the world famous runway. Ensuring she was in full comfort ahead of slipping into her heels, she sported Havaianas Slim flip flops in Crystal Rose.

Her flawless skin was pampered and preened as she was given a dewy finish with lashings of highlighter, while a slick of cat-eye liquid eyeliner perfected her sex kitten look to perfection.

Proving their gene pool to be extremely blessed, Gigi also exhibited her stunning good looks - yet as ever they showed the difference in their style.

The older sister flashed a hint of the same bra as she too dazzled during preparation for the show - pulling a variety of cheeky faces and poses.

The sibling's turn at the show comes after Bella revealed their mum Yolanda taught her how to pose for the show - as she dubbed her mother an 'emotional angel'.

Speaking to People magazine, the model said: 'My mum is my emotional angel. She always makes me feel so much better. Just like any mother would. She’s just like: "Shoulders back, be confident and walk strong."'

The Real Housewives of Beverly Hills star has revealed she is 'so excited' to see her daughters modelling alongside one another in the lingerie giant's showcase.