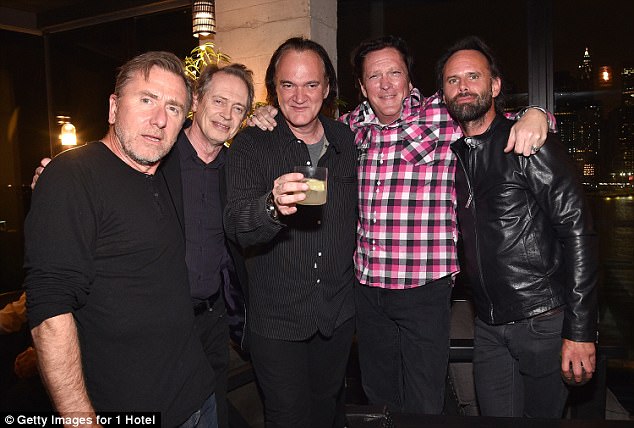 It's become a cult hit, despite a less than stellar start at the global box office.

And 25 years on from the release of Reservoir Dogs, director Quentin Tarantino, 54, reunited with his cast at the weekend to mark the special anniversary, as well as revealing a few behind the scenes secrets.

Steve Buscemi, 59, Michael Madsen, 58, Tim Roth, 55, and Harvey Keitel, 77, partied the weekend away at the Tribeca Film Festival in New York, hitting a special screening on Friday night before mingling at a private bash hosted by Hollywood hotshot and the 1992 film's executive producer Harvey Weinstein on Sunday.

Tarantino and his cast hit the 1 Hotel in Brooklyn, New York for their anniversary bash, joining models Adriana Lima and Doutzen Kroes.

The 1992 crime thriller saw the five men recruited for an ill-fated diamond heist, in which one of the members was - unknowingly to the others - a cop.

Because of the directors penchant for non-linear narrative, the audience knows almost from the get-go Roth is Detective Freddie Newandyke.

The only colour missing on the night was that of Mr Blue, played by real-life criminal turned crime author and actor Edward Bunker, who died in 2005, aged 71.

The gang's father and son recruiters Joe Cabot and Nice Guy Eddie - played by Lawrence Tierney and Chris Penn - also passed away in 2002 and 2006, respectively.

Speaking at Friday night's screening, Tarantino revealed that he was convinced the movie would be a flop, after a less than successful premiere at the 1992 Sundance Film Festival.