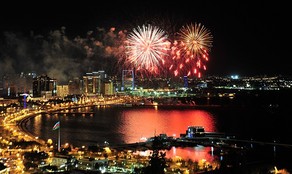 Spectacular fireworks will be organized at National Park on March 19 at 22:00 on the occasion of Novruz in order to hold the holiday event and nationwide tour at the state level and for high level celebration of these events.

It was told in the press service of Baku City Executive Power.

The executive power states again that bonfire will be flamed with fire brought from Ateshgah in the City National Park, which has been built in the territory in front of Azerbaijan State National Drama Theater behind Heydar Aliyev Palace, on March 15 at 19:00 p.m. local time - on 'Last Tuesday'.