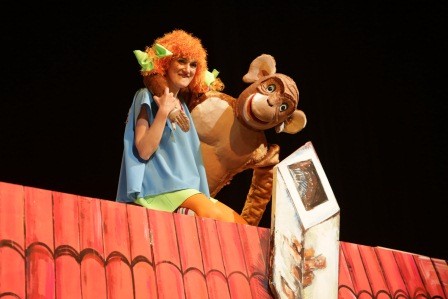 On 30 October 2016 the State Theater of Young Spectators (TYUZ) staged the premiere of "Pippi Longstocking" by the famous representative of Swedish children’s literature Astrid Lindgren (Karlsson on the Roof, the "Emil in Lonneberga" books, Madicken, Ronja the Robber’s Daughter etc.).

The play is the result of an international project between the TYUZ, the Embassy of Sweden in Azerbaijan and Azercell. It is the first time "Pippi" is played in the Azerbaijani language.

The theatre project follows a book project between the Embassy, Azercell and the State Committee for Refugee and IDP Affairs of the Republic of Azerbaijan earlier this year, through which nine Astrid Lindgren books were translated into the Azerbaijani language and donated to the school libraries of the 610 refugee schools around the country.

Before these joint projects, Astrid Lindgren’s literature was in principle not available in the Azerbaijani language, with the exception of the "Karlsson on the Roof" performance on the repertoire of TYUZ.

To help transfer the true spirit of Astrid Lindgren’s theatre play, the Embassy engaged the Swedish star theatre director, Mr Ronny Danielsson, as an adviser for TYUZ, where he worked with the theatre staff and took an active part in the preparations of the play. Mr. Danielsson visited Baku twice, supported by Telia Company, the Swedish mother company of Azercell.

By bringing the work of Astrid Lindgren to a broader Azerbaijani audience, the project partners hope to highlight the importance and integrity of every child. Indeed, children are the greatest joy of life for Azerbaijani and Swedish citizens as well as citizens of other countries. Astrid Lindgren’s literature celebrates the original creativity of children like no other literature.

"Pippi Longstocking" has been included to the theater’s repertoire by the decision of TYUZ’s Art Council and will be playing bi-weekly on TYUZ starting from October 2016, including during the November break.