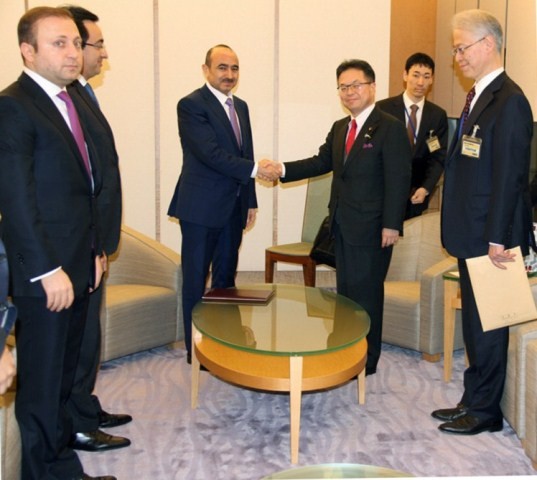 Azerbaijani President`s Assistant for Public and Political Affairs Ali Hasanov has paid a visit to Japan.

The visit aimed to discuss the current state and developing prospects of bilateral relations and cooperation between the two countries.

The Assistant for Public and Political Affairs has met Deputy Chief Cabinet Secretary of Japan Hiroshige Seko who highlighted the role of Azerbaijan in ensuring the energy security of Europe.

The Deputy Chief Cabinet Secretary also said Azerbaijan`s role in ensuring the security and peace increased in the entire region and the world. On importance of visit of the President`s Assistant for Public and Political Affairs to Japan Hiroshige Seko applauded the development of relations between the two countries, saying his country was interested in broader economic cooperation with Azerbaijan.

Ali Hasanov stressed the importance of cooperation between Azerbaijan and Japan in bilateral and international level.

The Assistant also emphasized the significance of continuing the implementation of investments by Japanese companies to Azerbaijan.

On dynamic development of Azerbaijan, as well as the reforms course carried out by President Ilham Aliyev, Ali Hasanov said the country conducted independent, active and stabilizing foreign policy.

Stressing the importance of reciprocal visits in development of bilateral relations, the Assistant handed over the letter of invitation of President Ilham Aliyev to Hiroshige Seko on Premier Shinzo Abe`s official visit to Azerbaijan.

The President`s Assistant for Public and Political Affairs has met Director General of the Office for the Promotion of the Tokyo 2020 Olympic and Paralympic Games under Japan`s Cabinet of Ministers, Special Adviser to the Prime Minister for healthcare and sport affairs Takeo Hirata, Vice-Minister for the Ministry of Foreign Affairs Miki Yamada.

They exchanged views on prospects of relations between the two countries in economic, cultural, social and sport fields.

The sides stressed that such visits would play a vital role in bringing the two nations closer to each other.

Azerbaijan`s Ambassador to Japan Gursel Ismayilzade was also present at the meetings.