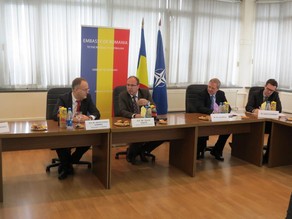 Embassy of Romania, in its capacity of NATO contact point embassy to the Republic of Azerbaijan, hosted a roundtable on NATO-Azerbaijan cooperation.

It was informed at the embassy of Romania.

Opening the roundtable ambassador of Romania Daniel Cristian Ciobanu highlighted that participation of deputy minister of foreign affairs of Romania at the event is a proof of the importance that Romania attaches to NATO-Azerbaijan partnership.

In the keynote speech of the roundtable Daniel Ioniță underlined Romania’s support for the development of partnership relations between NATO and Azerbaijan, reflected among others by the fact that Romanian diplomatic mission in Baku is performing for the fourth time in a row the mandate of NATO Contact Point Embassy to the Republic of Azerbaijan. Azerbaijan is a credible and committed partner of NATO.

Director of Defence Planning, Defence Policy and Planning Directorate at NATO Headquarters Paul Savereux presented the main elements of the cooperation between NATO and Azerbaijan in the framework of PfP Planning and Review Process.

Participants in the roundtable exchanged views on different aspects of joint interest regarding NATO-Azerbaijan cooperation.