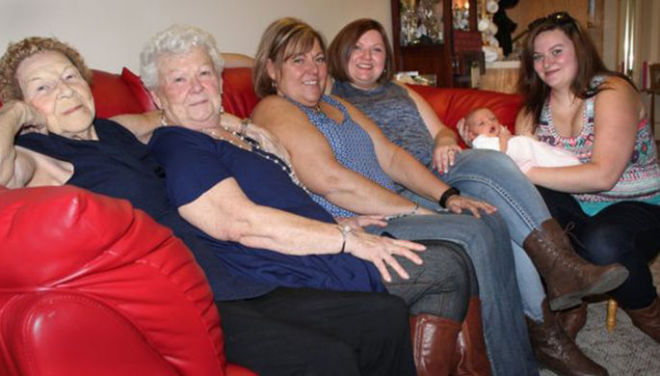 With the holiday season round the corner, many of us will be catching up with loved ones over a festive tipple or two.

And for Vera Sommerfeld of Lethbridge, Canada, this year brings a special reason to pop the champagne corks.

Baby Callie, born in October, is the newest addition to a family with six living generations of women.

"I just couldn't wait for this baby to be born, because it was going to be my sixth generation, and I waited for it for a long time."

Four of the women live in Lethbridge, a city in the province of Alberta, and all five (plus baby) catch up around once a month.

Ms Sommerfeld is a huge fan of the latest arrival, saying she adored her from the start.

"I couldn't even describe it. She's just such a beautiful girl. I love her so much," she said.

Two-month old Callie's mother, Alisa Marsh, is 20. Her grandmother Amanda Cormier is 39, and Grace Couturier is a great-grandmother at 59.

Gwen Shaw, the baby's great-great-grandmother, is a sprightly 75.

The Guinness World Record for the most generations in an unbroken line is seven, but to reach six is still extremely rare - and rarer still when they are all women.

Ms Cormier told the BBC she felt very young to be a grandmother at 39, "but now that she's here, I wouldn't change a thing!"

New mother Ms Marsh said having so many maternal figures around has been "wonderful".

"They visit all the time!" she laughed.

Ms Marsh married her husband Logan on 27 June 2015, and says her great-great-grandmother Ms Sommerfeld quickly started asking "when we were giving her her sixth generation!"

The 20-year-old told the BBC she hopes to have more children in the fullness of time. Of course, she hopes her many grandmothers will be around to meet them too.

Ms Shaw puts the family's longevity down to good genes. But after almost a century on earth, Ms Sommerfeld credits her drink of choice - rum and soda.

"She drinks them every day," Ms Marsh confirmed.

Great-grandmother Grace Couturier told the local Lethbridge Herald: "The one thing my grandmother [Ms Sommerfeld] has told us has kept her alive this long is waiting for that baby to be born. Now she's going to stay alive because the baby is here.

"It's amazing. It's absolutely amazing that my grandmother is still here to see my granddaughter have her first."