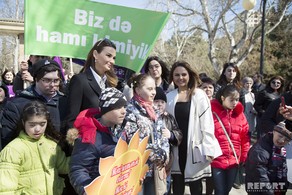 "Care - For Healthy Generation" under YAP Youth Union of Nizami district regional branch held rally today under slogan 'We're like everybody' in Baku on the occasion of World Down Syndrome Day.

The purpose of the rally held in Nizami district, "Heydar Aliyev Park - Park Boulevard", on the eve of the International Down Syndrome Day on March 21 was to draw public attention to this issue, in society, the role of people with Down syndrome and to emphasize the importance of such rallies MP Ganira Pashayeva and Head of Nizami district executive power Arif Qasimov spoke and expressed gratitude to the organizers of the march, welcomed such rallies.