Holiday gifts are presented in Pakistan in Ramadan 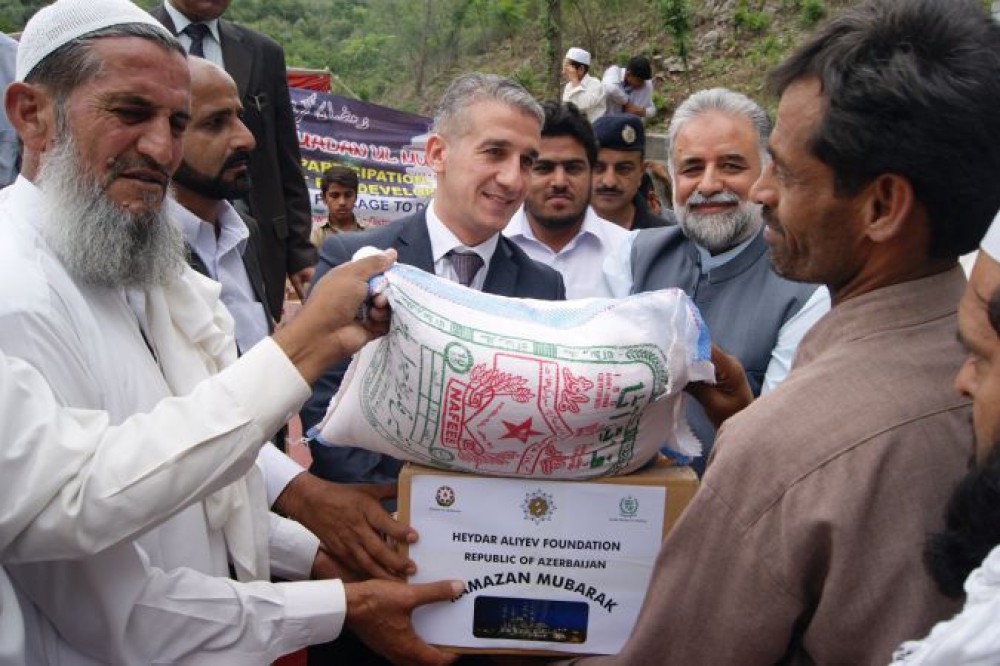 Holiday gifts are presented by the Heydar Aliyev Foundation in Pakistan in connection with Ramadan month.

Holiday gifts were presented by the Heydar Aliyev Foundation in a number of villages of Pakistan’s Abbottabad region in connection with Ramadan month. This action has covered over four hundred poor households of the region.

Speaking at the event, held with participation of Deputy Chairperson of Pakistan’s National Assembly Murtuza Javid Abbasi, a number of deputies of the Assembly, intelligentsia, public and political figures, Ambassador Ali Alizadeh underscored the common religious faith, cultural closeness and sharing common values of the peoples of Azerbaijan and Pakistan that also share their joy and sorrow with each other. The ambassador noted that relations between Azerbaijan and Pakistan develop in all areas, including the humanitarian sphere, and emphasized the role the Heydar Aliyev Foundation has played in the development of these relations, mentioning a number of humanitarian and socially-oriented projects implemented by the Foundation in Pakistan.

A.Alizadeh, noting that the Heydar Aliyev Foundation started its activities in Pakistan with construction of a girls’ school in Muzaffarabad city of Pakistan in 2005, said over the course of the 12 years past the Heydar Aliyev Foundation has implemented projects in the spheres of education, healthcare, ecology, social field etc., following the initiative of the Foundation’s President Mehriban Aliyeva. The ambassador mentioned that these projects have contributed to the strengthening of relations, friendship and solidarity between the two countries. Delivery of aid packages and gifts by the Foundation in connection with Ramadan month serves the same purpose, he added.

A.Alizadeh, congratulating the population of the Abbottabad region on behalf of President of the Heydar Aliyev Foundation, Azerbaijan’s First Lady Mehriban Aliyeva on Ramadan month, thanked Deputy Chairperson of Pakistan’s National Assembly Murtuza Javid Abbasi and other participants for joining the presentation event.

Speaking at the event, Deputy Chairperson of Pakistan’s National Assembly Murtuza Javid Abbasi expressed satisfaction with the development of relations between Pakistan and Azerbaijan, two brotherly countries, noting that such projects served warming of relations between peoples.

Recalling his visit to Azerbaijan this year, the deputy chairperson of the Assembly, giving information about the reforms and economic projects implemented in Azerbaijan, underscored that he has witnessed Azerbaijan’s living the period of development and progress, and that Pakistan too may take pride in this. Conveying his gratitude to President of the Heydar Aliyev Foundation Mehriban Aliyeva for humanitarian and socially-oriented projects implemented in Pakistan, the deputy chairperson of Pakistan’s National Assembly said the Ramadan gifts, along with delivering a joy to the local population of the Abbottabad region, were also a moral support to them.