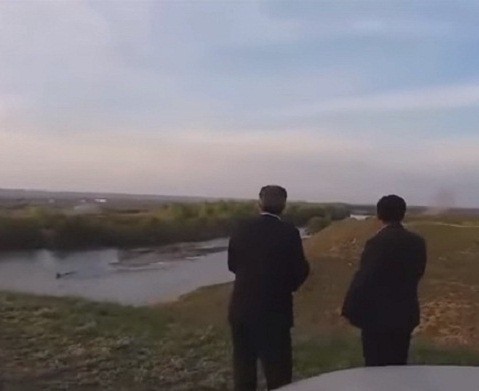 An Iranian house is East Azerbaijan Province was destroyed by a mortar shell, fired by Armenian troops on April 4.

Saeid Shabestari-Khiabani, the deputy governor-general of East Azerbaijan Province for security affairs told ISNA that after investigation Iranian experts found out that the martor shell was fired by Armenian troops.

He added that a village house in Khudaferin County was destroyed, but no one was killed.

Shabestari-Khiabani further added that Foreign Ministry will discuss the issue with Armenian side.

Iran announced of April 3 also that three mortar shells landed in a village in Khudaferin Country.

On the night of Apr. 2, all the frontier positions of Azerbaijan were subjected to heavy fire from Armenians, who were using large-caliber weapons, mortars, grenade launchers and guns. Azerbaijani settlements near the frontline densely populated by civilians were shelled as well.

A counter-attack was carried out following the provocations of the Armenian armed forces on the night of Apr. 2.

Six Armenian tanks, 15 gun mounts and reinforced engineering structures were destroyed and more than 100 servicemen of the Armenian armed forces were wounded and killed during the shootouts.

Twelve servicemen of the Azerbaijani armed forces heroically died, one Mi-24 helicopter was shot down and one tank was damaged on a mine.

Three more soldiers of Azerbaijan were killed during the past day and night as a result of the ceasefire violation.

Armenia has not yet implemented the UN Security Council`s four resolutions on withdrawal of its armed forces from the Nagorno-Karabakh and the surrounding districts.

The car of the Italian embassy was set on fire