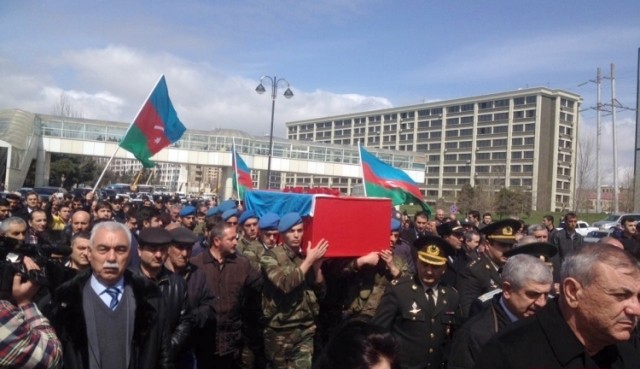 Azerbaijani soldier Mushviq Orujov (1994) who heroically died during the clashes with Armenian armed forces has today been laid to rest in the Hovsan township of Baku.

The martyred solider had been drafted from Zangilan district military commissariat in June 2015.

The funeral was attended by the heads of the Zangilan and Khatai district executive authorities, defense ministry officers, the martyr’s close ones and public figures.

The Azerbaijani national flag covering the coffin was presented to the soldier’s father.

Then fire was opened into air three times.

Those attending the funeral chanted slogans such as “Garabagh is ours, and will be,” “The martyrs are immortal, the motherland is indivisible!” etc.

The martyr’s father Arif Orujov said he feels proud of his son’s bravery.

“My son has always honored me, and with his last step he honored not only his family but entire Azerbaijan. The motherland and land require sacrifice. I wish we take back our occupied lands so that the blood of our martyrs does not go in vain,” said the father.

Note that, Mushviq Orujov had scored 700 points in university entrance exam in Azerbaijan.