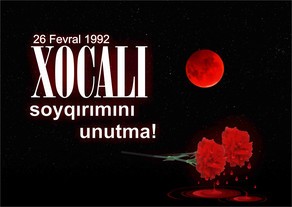 Commissioner for Human Rights (Ombudswoman) of the Republic of Azerbaijan Elmira Suleymanova issued a statement on occasion with the 24th anniversary of Khojaly genocide.

The statement reads below:

Khojaly Genocide, which was a part of Armenian aggressive policy against Azerbaijan and resulted in mass violation of the norms and principles of international law, human rights and freedoms, is another terrible example of long-term ethnic cleansing and genocide policy carried out by the Armenian nationalists and their supporters against Azerbaijan: 'Despite already 24 years pass from the tragedy, this genocide has not been legally assessed in the international scope.'

Statement declares, the criminals who destroyed the lives of innocent people shall be brought to justice and penalized.

The statement has been translated into the English language and addressed to the Secretary General of the United Nations, United Nations Security Council, United Nations High Commissioner for Human Rights, European Commission, Council of Europe, OSCE, International and European Ombudsman Institutes, Asian Ombudsman Association, International Peace Bureau, ombudspersons of foreign countries, embassies of the Republic of Azerbaijan abroad, as well as the foreign embassies in Azerbaijan, and 180 organizations of the Azerbaijani Diaspora.

At the same time, the statement will be presented to the UN Human Rights Council 31st Session.