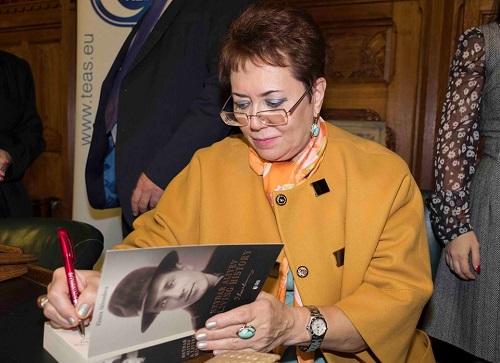 On 31 October, the definitive English-language biography of Azerbaijani National Leader Heydar Aliyev received its international launch at the UK Parliament, during a standing-room only event hosted by Bob Blackman MP, who is also Chair of the All-Party Parliamentary Group for Azerbaijan. The event was organised by The European Azerbaijan Society (TEAS). TEAS Press has published the new biography, and attendees included Lord Kilclooney, Lord Addington, Mark Pawsey MP and Martin Vickers MP.

Axar.az reports that this triple-volume biography of the National Leader charts each epoch of his life. The author is Elmira Akhundova MP, who was a journalist from 1990–2003. She experienced first-hand the early years of regained Azerbaijani independence, and witnessed the period spanning the return of the National Leader from a pivotal role in the Soviet Politburo to successful leadership of independent Azerbaijan, despite a period of great turmoil. As a member of the press entourage close to the President, Mrs Akhundova was perfectly placed to observe his every political move and interviewed him on myriad occasions. Many attendees at the launch were delighted to receive copies of the biography, personally inscribed by the author.

Altogether, Mrs Akhundova worked on the book for 14 years, obtaining access to myriad hitherto unpublished documents and undertaking 350 interviews with family, friends and colleagues – some of which revealed their recollections for the first time.

Jack Pegoraro, Head, TEAS London, welcomed all attendees and speakers before handing the microphone to Bob Blackman MP, who commented: “Much of the development of Baku and Azerbaijan, as a whole, is attributable to the work of Heydar Aliyev. He took the country from being a dull former Soviet Republic through to being a country that is fully independent, where wealth is spread out amongst the population and everyone is gaining.

“Due to his policies, UK–Azerbaijani relations have become increasingly strong, predominantly due to his work in developing the Contract of the Century between the BP-led Azerbaijan International Operating Consortium (AIOC) that led to the development of oil and gas extraction which has resulted in a high level of prosperity for his nation. This is a wonderful biography and clearly a great work from an author who was close to her subject – Heydar Aliyev – who was a good friend of the UK.

“I have visited Azerbaijan on four occasions, and have witnessed the dramatic progress of the country first-hand. I have also seen the plight of the internally displaced persons (IDPs) who are the ongoing victims of the illegal occupation of Nagorno-Karabakh and the seven surrounding regions. I have also seen the work undertaken by the Azerbaijani government to ensure they have basic quality living conditions.”

H.E. Tahir Taghizadeh, Azerbaijani Ambassador to the UK, recalled: “Every time we celebrate the legacy of Heydar Aliyev, we must remember that we have a country that is a) stable, b) independent c) a reliable partner for other countries – including the UK. If we go back over 20 years, we would see a country that was being torn apart by various warlords, still coping with foreign troops on its territory, and importing almost everything – including gas.

“We now have a country that provides, rather than receives, foreign aid. Despite the oil crisis, our GDP has continued to increase. The only aspect that has not been resolved is the continuing Armenian occupation of nearly 20 per cent of Azerbaijani territory.

“Heydar Aliyev was not just a larger than life personality – but a sweet and caring man. His attention to detail rescued the country on more than one occasion. I thank Mrs Akhundova for her remarkable work.”

Dr Tamara Dragadze, former advisor to BP, who witnessed the Contract of the Century signing, remembered his amazing recall and focus, which were combined with an iron will that was demonstrated many times in the face of adversity. He had something else, and is undeniably worthy of such a remarkable biography.”

Mrs Akhundova commented: “No-one in the world could have assumed that the former communist leader of Azerbaijan, one of the leaders of the powerful Soviet empire, would soon surprise the whole Republic, and then the whole world, rising from the ashes like a phoenix.

“What was the mystery of this man? How, contrary to accepted wisdom, did he manage to successfully step in the same river twice? I think the answer lies in the words of the great British Prime Minister, Sir Winston Churchill, who famously said: ‘The only way a man can remain consistent amidst changing circumstances is to change with them, while preserving the same dominating purpose.’ Heydar Aliyev could change according to time and situation, and organically did so. His overarching dedication was to the national interest of his motherland – his beloved Azerbaijan.

“Heydar Aliyev lived a very hard life. He was to see the collapse of ideals in which he believed passionately, and survived the disintegration of a country that he had served faithfully. He got to step into a whole new era and begin life from scratch, ascending a second time to the summit of a political Olympus. But that would happen in a different country and different epoch.”

Music was dear to the heart of the National Leader, who was an amateur khanende (mugham singer), and thus it was most apt that a musical interlude was provided by the legendary septuagenarian tar player Rafiq Rustamov, Honoured Art Worker of the Azerbaijani Republic. Rafiq won his first competition in 1969, the year Heydar Aliyev was appointed as leader of Azerbaijan Soviet Socialist Republic (SSR), and his career developed contemporaneously with that of the National Leader.

The event concluded with a lively question-and-answer session, covering such topics as the problems of extrapolating facts for incorporation in a biography; the background to the transition of power between Presidents Abulfaz Elchibey and Heydar Aliyev; and the difficulties of adequately representing such a man whose policies and personalities had an irrevocable impact on his country.