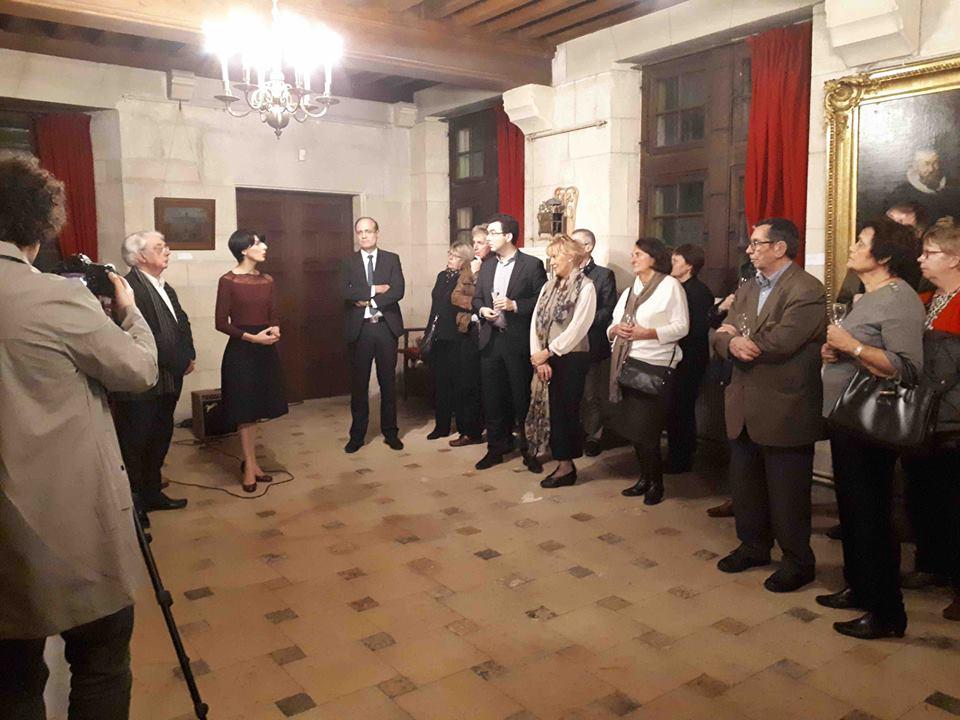 Some unique – and hitherto unseen – photographs of 19th century Baku have been exhibited at the Musée-Hôtel Le Vergeur in Reims, France, as an initiative of the French office of The European Azerbaijan Society (TEAS) Foundation. The private view and inauguration cocktail, attended by around 60 people, took place on 24 November, in the presence of H.E Rahman Mustafayev, Ambassador of Azerbaijan to France; H.E. Ecaterine Siradze-Delaunay, Ambassador of Georgia to France; and Pascal Labelle, Deputy Mayor of Reims in charge of Culture.

Axar.az informs that the photographs were taken by pioneering traveller, photographer, philanthropist and former resident of the Musée-Hôtel Le Vergeur, Hugues Krafft (1853–1935), who travelled to the South Caucasus in 1896 and 1898 with the blessing of Russian Tsar Nicholas II. A Gold Medal Winner at the Société de Géographie de Paris and Prix Montyon of the Académie française, some of the images were published by Hachette in Á travers le Turkestan russe in 1902, but the vast majority remained unseen. None have been republished for over a century.

Using the most lightweight cameras available at the time, he captured more than 1000 views of the South Caucasus – including Azerbaijan – 547 of which are preserved in the archives of the Musée-Hôtel Le Vergeur. They capture a time and place that has all but disappeared, showing the populace in the midst of their daily activities, or posed in their best clothes, specifically chosen in honour of what was, for many subjects, their first experience of photography. Altogether, 26 of the photographs of the South Caucasus were captured in Baku in December 1898.

Curated by French-based Georgian historian Ana Cheishvili, and co-ordinated by Ulkar Muller, TEAS France, this fascinating exhibition is valuable on both a sociological and ethnographic level. Many of the vignettes from everyday life are precursors of what we now regard as reportage, and show vanished sights; indigenous peoples, many years before globalisation; and the technologies of the past. However, such scenes as the Shirvanshahs’ Palace and Maiden Tower in the Old City (Icheri Sheher) in Baku – a UNESCO World Heritage Site – are remarkably unchanged to this day.

“Baku was merely a medium-sized city when Krafft visited it. However, he was fascinated by its architecture, replete with Turkish, Persian and Russian heritage. Krafft was an amazing and very inquisitive traveller, historian, writer, photographer and ethnologist who liked everything he saw. And, thanks to this exhibition, attendees are likely to want to visit contemporary Baku.”

Marie-Laetitia Gourdin, Director, TEAS France added: “By looking into the photographs of Azerbaijan archived in these French collections, we discovered the existence of photographs depicting Hugues Krafft’s travels in the Caucasus, and we realised that there were no publications charting his journey to Baku. Tonight, you will discover an exhibition that is the result of research that we have undertaken, the content of which is now being published by TEAS Press in a catalogue of the same name.”

H.E. Rahman Mustafayev, Azerbaijani Ambassador to France, hailed this initiative and explained: “Exhibitions such as that presented here enable us to understand the history of Baku, and to consider its position in the world of that time. Although part of the Russian Empire from the 19th century and into the beginning of the 20th century, and in the 1920s falling under the yoke of the Soviet Union, Baku has maintained its identity.”

H.E Ecaterine Siradze-Delaunay, Georgian Ambassador to France, acknowledged the importance and symbolic significance of such projects in promoting the culture and history of South Caucasus countries in France; the historic relations between the region with the city of Reims; and their role in underlining the special nature of the friendship between Georgia and Azerbaijan, which are neighbours in the South Caucasus.

Pascal Labelle, Deputy Mayor of Reims in charge of Culture, emphasised the importance and role of photography as a witness to history and recorder of heritage. He added: “These photographs show the historic ties between Reims and Baku.”

The event continued with a guided tour of the exhibition by Ana Cheishvili.