The occupied territories must be returned to Azerbaijan 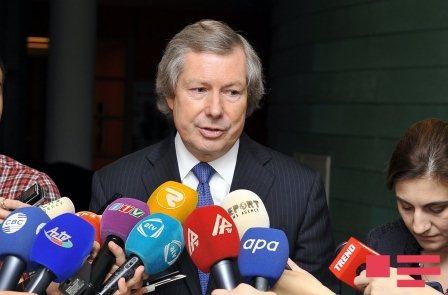 The occupied territories must be returned to Azerbaijan, as well as the status of Nagorno-Karabakh must be determined as part of a comprehensive solution to the Armenian-Azerbaijani conflict, OSCE Minsk Group co-chair James Warlick (United States) said in an interview to the Voice of America (VOA).

He said the Minsk Group is a form of negotiations accepted by the sides.

“We do not oppose discussions on the Nagorno-Karabakh conflict within regional and international organizations. We support the right of Azerbaijan and Armenia to solve this problem their way,” Warlick said expressing hope that Armenia and Azerbaijan will remain committed to their obligations to find a negotiated solution to the conflict and cooperate closely with the Minsk Group.

The US co-chair said they are at any time ready to meet with Azerbaijani Foreign Minister Elmar Mammadyarov to continue discussions on elements of solution.

“We believe that dialogue between the Azerbaijani and Armenian presidents should take place in order to go forward in the peace process,” he stressed.

Asked “On the initiative of former US Secretary of State Madeleine Albright, the Azerbaijani and Armenian presidents have begun direct talks with mediators. This format resulted in a change of government in Armenia and a murder in parliament in Azerbaijan. Do you think the sides can begin negotiations again with no mediators?” Warlick said, “For any progress in the settlement of the conflict, the co-chairs think that trilateral meetings of the presidents should be held through the mediation of US Secretary of State John Kerry, Russian President Vladimir Putin and French President François Hollande.”