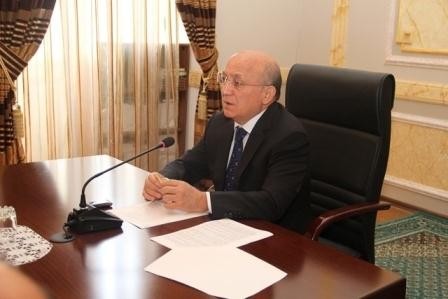 The Committee told that the leadership of the state committee, department heads and chairmen of the newly-registered communities attended the meeting.

The Committee Chairman Mubariz Gurbanli speaking about the state-religion relations in Azerbaijan said the state consistently pays attention and care to the religion, as well as the religious communities in the country.

Stressing that the head of state takes constant measures in the regions under the order dated 27 November 2014 to provide financial aid to religious communities in order to further heighten spiritual enlightenment and promotion of national-moral values in the country, Mubariz Gurbanli called on the newly-registered religious communities to accurately inform the public about the religion and the Islamic values.

The state committee chairman, giving his recommendations to the chairmen of newly registered religious communities, emphasized the need for the communities to be more active and work in mutual cooperation with akhunds and imams in different places as well as CMO officials. At the same time, he recommended they prevent acts likely to provoke confrontation between different denominations, direct their communities to strife towards national values and ideological combat against radicalism, and support national interests. Mubariz Gurbanli then presented registration certificates to community chairmen.