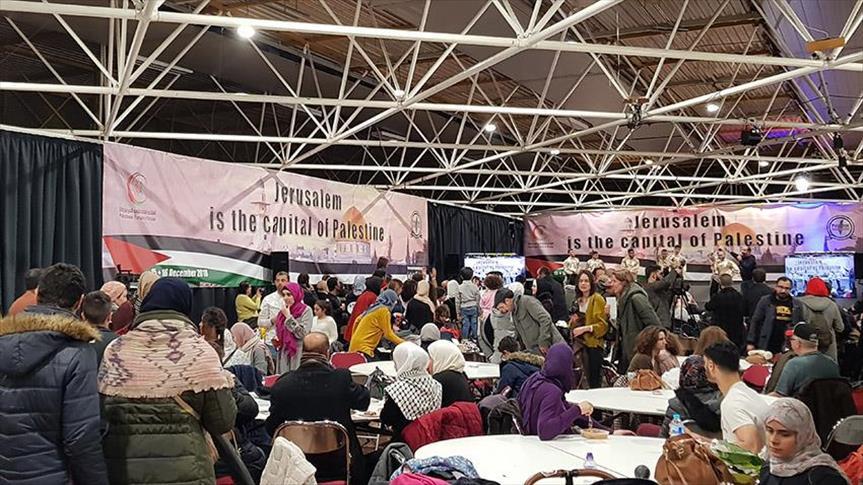 London has played host to the biggest Palestine festival of 2018 with over 3,000 guests attending and a variety of shows, exhibitions and stalls showcasing Palestinian art, culture and history.

The event, hosted by The Biggest Palestine Festival group, is held over a period of two days every year in an exhibition centre that holds up to 30 stalls as well as hosting musical performances, conferences, lectures and an array of art exhibitions.

"Palestine has become synonymous with politics and conflict and whenever you see Palestine being mentioned on the news, it is solely about its conflict with Israel and the illegal occupation taking place on its lands” said Sasha, a 23-year-old postgraduate student who is half Palestinian.

"This festival shows that Palestine and its people are much more than that. Palestine has an incredibly rich culture and history, one that is celebrated and cherished, not only by its people, but also by many who aren’t Palestinian and that we will not be defined by this terrible conflict and we will not allow the zionist oppression and occupation to bring us down” she added.

Among the many activities taking place, attendees enjoyed tasting and experiencing traditional Palestinian food such as Falafel, Kunafe, Humous and Foul and listened to a variety of Palestinian music and dance such as the famed Dabkah dance by the Yasmin al-Sham group and Palestinian hip hop and rap by the Rap for Palestine group.

The event also featured poets and spoken word artists who humbled audiences by giving elaborate and emotive descriptions of the daily oppression face by millions of Palestinians in the Gaza Strip and the West Bank.

Artists such as Zakaria Haj Khalil, Yahya Hawwa, Rami El Hindi and Omar Al Saeidi were able to catch the attention of hundreds of people and demonstrate the variety of the Palestinian music, poetry and spoken word.

Among the many conferences that were held, one in particular was called the "British Palestinians’ Conference" and hosted a panel of human rights and political activists and professors from a number of British universities.

Rather than discuss the current political state of Palestine, a discussion that is routinely held in such events, the conference focused on the arts and culture scene coming out of Palestine and how Palestinian youth are making their voices being heard through art, fashion and poetry.

"The youth of Palestine are finding new ways to resist the occupation," said Laila, a 22 year old activist. "By enhancing and promoting Palestinian culture and art, the youth are saying to the zionist forces ‘we have a weapon stronger than the whole of your army and one that you will not be able to destroy with your bullets and bombs!’".

The event will run until Sunday the 16th and will be open to all guests free of charge.