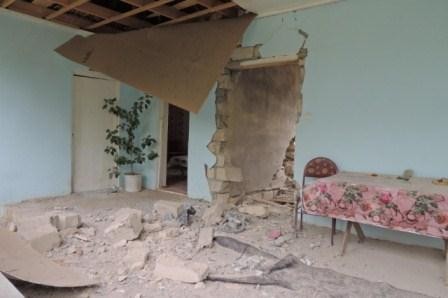 Aghdam’s Afatli village has been one of the most damaged civilian areas as a result of the Armenian artillery shelling that started on the night of April 27-28.

Nearly 60 shells fell in the village. “Qara inek” farming facility and 22 houses were damaged, as well as two houses were completely destroyed, while one house was partly destroyed. One civilian was wounded in the shelling.

“Two Grad shells fell in our house at night. The house and all the stuff in it was destroyed,” Afatli villager Zafer Ibrahimov told local media.

The shell which fell in the house of another villager Aliaga Aliyev fortunately did not explode.

“We woke up when Armenian units started to shell the village. The shell thrown by Armenian units fell in the house nearly at 03:00 PM from. God saved us and the shell did not explode,” said Aliyev.