New board created at the Ministry of Economy 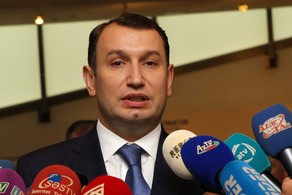 Board of Appeal was established at the Ministry of Economy.

The board was established in accordance with the implementation of the Azerbaijani President's decree of February 3, 2016 "On creation of Appeal Boards in central and local executive authorities of the Republic of Azerbaijan."

Appeal Board, which will be chaired by the Deputy Minister of Economy Sahib Mammadov, consists of seven people.