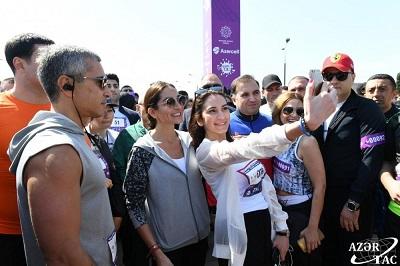 Baku Marathon-2019, arranged under the auspices of the Heydar Aliyev Foundation, was held.

Axar.az informs that, president of Baku Media Center Arzu Aliyeva attended the marathon held under the slogan “Win the wind”.

The semi-marathon covered a distance of 21 kilometers, starting at the national Flag Square and finishing at Baku Olympic Stadium.

Among the participants were also more than 300 representatives from the embassies of the UA, China, India, Iraq, Iran, Kazakhstan, Lithuania, Morocco, Uzbekistan, Turkey, Turkmenistan and other countries.

This year`s marathon introduced a timing technology for accurate athletics race timing and track results of each runner.

Awards for the Baku Marathon-2019 granted in two categories: the first three places among men and women. Winners of the first places in both categories awarded 3,000 AZN, whereas the runner-ups and third place winners got 2,000 and 1,000 AZN respectively along with gifts, medals and certificates.