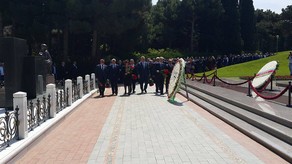 In connection with the 93rd anniversary of the birth of national leader Heydar Aliyev, leadership of the ruling New Azerbaijan Party (YAP) have visited the Alley of Honor and paid tribute to Azerbaijan's great leader and laid a wreath and flowers at his tomb on May 7.