Representative of the Russian embassy was summoned to the FM 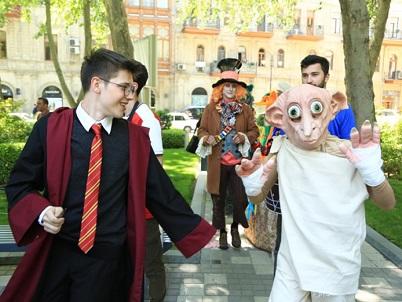 The Local Organizing Committee has launched an interesting project on the final match of the UEFA Europa League.

Axar.az informs that, until the day of final match on May 20, the legendary English characters - James Bond, Queen Elizabeth II of England, his team of guards, "Bitlz" rock band, world-renowned comedian Cary Chaplin, "Queen" her vocalist Freddie Mercury, heroes of the Alisa Wonderland, Harry Potter and her friends, the heroine of the English people's favorite tale - Robin Gud, genius playwright William Shakespeare, Sherlock Holmes and others will make a music parade in different parts of Baku.

Today's parade covers the Puppet Theater and the city's center - Nizami Street and the Gosha Gala Gate from Port Baku Mall. The heroes of Parade were met with interest by the residents and were photographed with them. It is a surprise that the locals will be traveling in the neighborhood of Baku in the next few days.

The final stamp of the famous British heroes will be the Baku Olympic Stadium, which will be the final match of the UEFA Europa League on May 29.

Representative of the Russian embassy was summoned to the FM