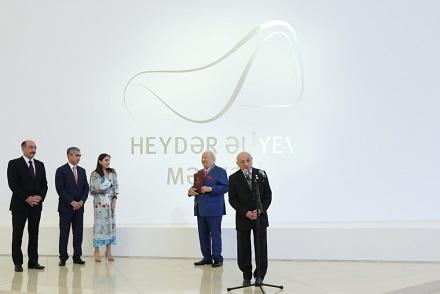 Axar.az informs that, the Moscow Museum of Modern Art together with the Heydar Aliyev Center and the Russian Academy of Arts present the “Possible Dimensions” exhibition.

Vice-President of the Heydar Aliyev Foundation Leyla Aliyeva attended the opening of the exhibition.

Director of the Heydar Aliyev Center Anar Alakbarov highlighted the importance of the exhibition. He noted that Zurab Tsereteli was awarded "Dostlug" Order under the order of President Ilham Aliyev and congratulated the artist on this occasion.

Addressing the event, Zurab Tsereteli thanked the Heydar Aliyev Foundation for supporting the organization of the exhibition. He said that he was happy to receive "Dostlug" Order for his fruitful services in strengthening cultural relations between the Russian Federation and the Republic of Azerbaijan. The artist thanked President Ilham Aliyev for the attention.

Possible Dimensions represents Zurab Tsereteli’s fruitful creative career, including works influenced by his encounters with the world-renowned maestros Marc Chagall, Pablo Picasso, and Robert Rauschenberg. The project brings together more than 30 works from Moscow, Tbilisi, and London, including paintings, sculptures, and enamels that cover the artist’s long career.