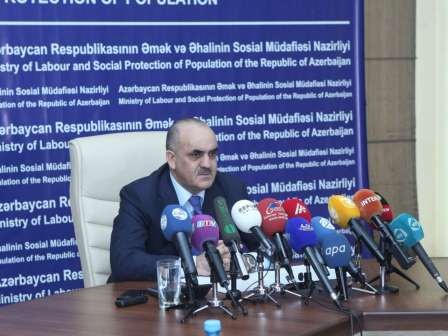 In the cities and districts of Azerbaijan, centers of the social welfare public service will no longer be involved in this process [application, review, reception and making decisions on targeted state social assistance], the minister said.

In case if within six months citizens apply in paper form and not in electronic form, the staff of these centers will send these applications to the electronic system of the ministry, Muslimov said.

He went on to add that citizens will also be able to apply for targeted social assistance via state post offices.

The minister noted that as of February 1, 2016, as many as 105,500 people receive targeted social assistance in Azerbaijan.

Muslimov said that some restrictions will be removed with the entry into force of the new rules regarding the targeted state social assistance.

Previously, if more than half of the average monthly income of a family was directed to pay off credit debt in a bank, the family was denied receiving the targeted state social assistance, Muslimov said, adding that this restriction has been removed.

In addition, if earlier a family member studied in paid educational institutions, and if within 12 months the family paid off the amount exceeding the minimum wage by 10 times for his (her) education, that family was also denied receiving the targeted state social assistance, the minister said.

This limitation has also been removed, but under a condition that the income of this family will be taken into account when calculating the targeted state social assistance, Muslimov said.