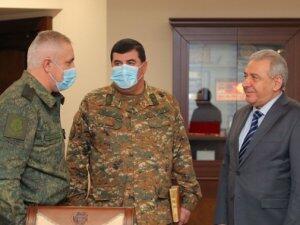 An attempt to remove the bust of Armenian fascist leader Garegin Njden in the Azerbaijani city of Khojavend failed.

Axar.az reports that the order of the commander of the Russian peacekeeping forces Rustam Muradov on the demolition of the monument has not been implemented. Local residents and radical nationalists from Armenia prevented the removal of the bust. Tensions arose between peacekeepers and residents during the incident.

Commander of the Russian peacekeeping contingent Rustam Muradov demands that the bust be removed by May 9, Victory Day.

Along with Russia, Azerbaijan also demands the removal of the monument from Khojavend.