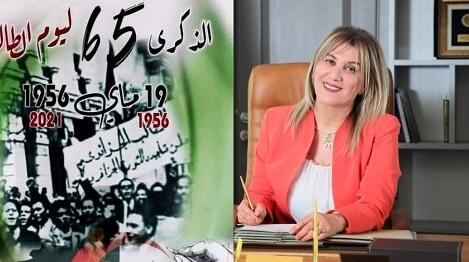 The Algerian Embassy in Azerbaijan has issued a statement on National Student Day.

Axar.az reports that the statement spoke about the students' struggle against French colonialism for the freedom of their countries.

Algeria celebrates May 19 of each year the day of the student which refers to the memorable date of May 19, 1956, when Algerian students decided to integrate the fight against the occupier announcing to the whole world and without the slightest equivocal, in a resounding appeal, their alignment alongside their people and their adherence to its just cause for the liberation of the country and its liberation from French colonization.

Armed with their knowledge and their patriotic ardour, they indeed set the most eloquent examples of sacrifice. They abandoned school benches for the ‘maquis’ where pens gave way to weapons. No longer indulging in false tranquillity, they decided to forgo rest until the homeland was liberated and the dignity of the people recovered.

This historic decision best reflected their nationalist consciousness and their political maturity. It embodied an unwavering determination that could only emanate from an elite imbued with love for the motherland and faith in the justice of its cause.

These students were fully aware of the vanity of science when it is not used to free man from bondage. They embarked on the defence of freedom and human dignity signing the most glorious pages of our history. They put their knowledge at the service of the Revolution and by their conscience, their maturity and their dedication, they conferred more efficiency and effectiveness on the liberating act" - the statement reads

Algerian Ambassador to Baku Salima Abdelhak sent a congratulatory message to all students on this significant day:

“I take the opportunity of the National Student Day to pay tribute to our students in Algeria and elsewhere, including Baku, whose genius and energy have always been put at the service of our beloved Country and Nation. I wish them fulfilment and success in a vibrant Algeria which more than ever needs their contribution with creative and innovative ideas to even more advance our Country and create the Algeria of their aspirations where the contribution of everyone is valued. My best wishes to you on this day” - the ambassador stated.