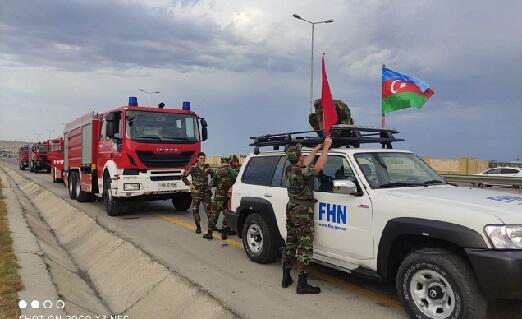 In accordance with the order of Azerbaijani President Ilham Aliyev, the next group of firefighters of the Ministry of Emergency Situations (MES) was sent to the brotherly country on July 31 to extinguish forest fires in Turkey and prevent their spread.

The group was seen off by Deputy Minister of Emergency Situations Lieutenant General Etibar Mirzayev and gave relevant instructions.

In an interview with reporters, the Deputy Minister noted the complexity of extinguishing fires in Turkey. He said that Azerbaijani and Turkish specialists are working together to localize and prevent the fire. The group will arrive in Marmaris in two days via Georgia and join the first group to take part in firefighting.

It should be noted that, on the instructions of the President of the Republic of Azerbaijan, the first group of 100 firefighters of the Ministry of Emergency Situations left for Turkey yesterday. Our firefighters are divided into two groups and are currently working selflessly to put out fires in the Marmaris region. Our firefighters are fighting hard, especially in the mountainous terrain with high terrain.