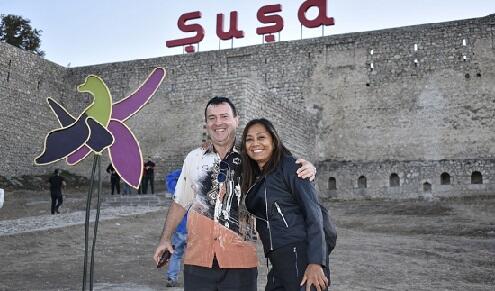 Foreign tourists, who visited Karabakh for the first time on a commercial test flight, arrived in Shusha after Aghdam.

Axar.az reports that more than 30 world-famous international travelers from different countries first visited the Upper Govharaga Mosque. The guests were informed that during the 30-year occupation, religious monuments, including mosques, were vandalized by Armenians. Immediately after the liberation of Shusha, repair work began on these mosques.

International travelers then got acquainted with the walls of the castle. It was noted that the fortress, built by Karabakh khan Panahali khan, protected the city from foreign interventions for a long time and was a symbol of invincibility. During the occupation, the castle walls were subjected to Armenian vandalism. After the liberation of Shusha, the fortress was repaired.