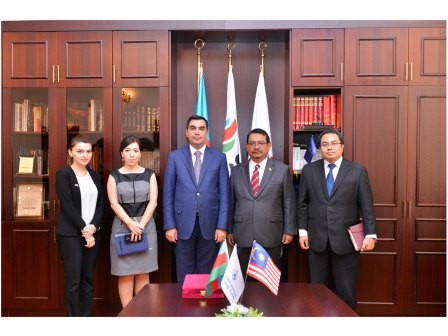 Roslan Abdul Rahman, Ambassador Extraordinary and Plenipotentiary of Malaysia to the Republic of Azerbaijan, visited Baku Higher Oil School (BHOS) and met with Rector Elmar Gasimov and the faculty of the Higher School.

Briefing about the higher school Rector Gasimov touched upon the mutual relations between the two countries and underlined the importance of the relations in the field of education. Emphasizing similarities shared by both countries, the Rector said that a wide potential existed for further collaboration, especially in the spheres of education and research.

Accenting on the higher school’s role in training of highly qualified specialists in petroleum, chemical, automation and other relevant sectors in compliance with the requirements of the contemporary national and international labor markets Rector Gasimov underlined the importance of the practical skills apart from theoretical knowledge for students, and informed the Ambassador about the internship opportunities provided by international companies operating in Azerbaijan saying that Petronas, a Malaysian company having presence in Azerbaijan, would significantly contribute in this regard.

Rector Gasimov noted the school’s interest in establishing collaboration with Malaysia University of Science and Technology and Petronas University of Technology in a number of related areas, especially in information-communication technologies and computer engineering. The Rector also said that BHOS has already started international admission and wide opportunities existed for Malaysian students to study at BHOS.

Ambassador Roslan Abdul Rahman expressed his honor to visit the higher school and extended his gratitude to the Rector for the warm welcome. Underlining that the potentials of the relations, especially in education and research are very promising, the Ambassador expressed his commitment to render his support in initiating comprehensive bilateral relations.

Later, the ambassador was awarded the Honorary Guest Diploma on behalf of BHOS.