Azerbaijani Ambassador spoke at a meeting of AJC 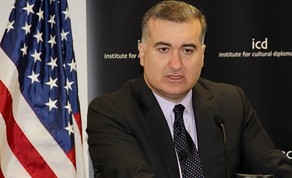 AJC kicked off its 110th anniversary year at the organization's Board of Governors Institute.

The three-day event in Miami brought together more than 400 people, including AJC President Stanley Bergman and other senior lay leaders, joined by staff from across the country, as well as Europe and Israel; diplomats from more than 20 countries that work closely with AJC; and a range of Florida civic, political, and religious leaders.

"What AJC does goes beyond Jewish advocacy. AJC stands for the rights of people around the world, including publicly denouncing incidents when Muslims are demonized simply for being Muslim," said Azerbaijani Ambassador Elin Suleymanov, who visited Israel with AJC's Project Interchange (PI).

Further, addressing AJC's efforts to combat the rise in anti-Semitism, the ambassador said that "any appearance of anti-Semitism begins a chain reaction that hurts everyone."