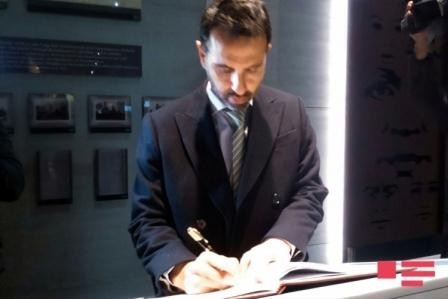 Mr. Siddiq was informed that the mass graveyard, which is a result of the genocide committed by Armenians against Azerbaijani people, was revealed in April 2007 during excavation works.

It was said that as result of the researches conducted by employees of the Institute of Archeology and Ethnography of Azerbaijan National Academy of Sciences, remains of more than 400 people were found in the graveyard. Over 50 of them were children, more than 100 were women, and the rest were the old. Lezghins, Jews, Tats and representatives of other ethnic groups killed by Armenians were also buried in the graveyard.

The ambassador said it is his first visit to the Guba district and the Memorial Complex.

“It is a great opportunity for studying the history of the region and Guba residents’ lives. Therefore, I began my tour to Guba with a visit to the Genocide Memorial Complex. The complex clearly shows suffering and inhumane treatment the Guba residents were subjected to in 1918,” he noted.

Such events once again underline the importance of peaceful coexistence, according to Siddiq.

Then, the ambassador met with the district executive authorities. The diplomat also visited a carpet weaving enterprise in Guba and Krasnaya Sloboda (Red village), a famous Jewish settlement.