Cuba and US played with each other for first time 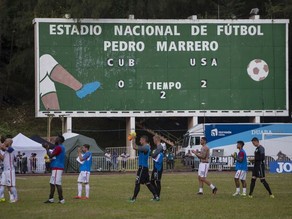 National football teams of Cuba and the United States held their first friendly meeting since 1947.

The US team won Cuba with a score of 2: 0 in the stadium named Pedro Marrero in Havana.

The wife of US Vice President Joe Biden, Jill, who is on an unofficial visit to Cuba, did not miss the chance to watch the game.

In 2014, the two countries for the first time in more than half a century, announced the desire to restore diplomatic relations.