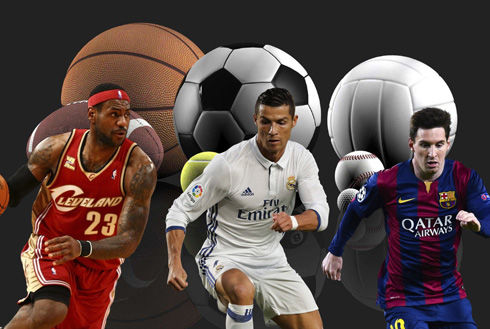 Forbes have announced the 20 highest-paid athletes of all-time and as you can imagine a number of the biggest stars in sports history feature.

With boxers, footballers, basketballers, golfers and more, the list is packed with prestige (and cash).

Here are the top 20 highest-paid athletes and their reported fortunes.

The Filipino boxer is one of the best boxers of all-time and he has made a reported $490 million (£389 million) from his boxing exploits.

Sticking with boxing, 10-time world champion Oscar De La Hoya made a reported $510 million (£405 million) from his in-ring career as well as his promotion company 'Golden Boy Promotions' which he set up in 2002.

Arguably the greatest player ever to play the game of football, Messi comes in 17th place on the all-time rich list despite being just 29. The Argentine ace's career earnings are said to stand at $520 million - which equates to around £413 million)

The 14-time All Star signed a number of big-money contracts throughout his career and that means he has reported earning of $600 million (£477 million).

Federer is one of the biggest names in Tennis history and has won an incredible 17 titles in his glittering career. He is also one of the most marketable athletes and has been heavily endorsed by the likes of Nike and Wilson. $600 million (£477 million) is the figure given to Federer.

The second of three footballers on the list, Cristiano Ronaldo is three players ahead of his arch-nemesis Lionel Messi. He is the definition of a global phenomenon and has all sorts of outside projects as well as his on the pitch matters. The Real Madrid man's career earning are said to be $620 million (£493 million)

The Cavs hero's earnings are reportedly around the $640 million mark (£508 million) and it probably has something to do with the fact that King James' current contract sees him make $30 million every year, on top of his lifetime link with Nike, which sees him rake in even more dollar.

Norman's successful career and outside ventures has culminated in him having earnings of $680 million (£540 million) - putting him in 12th place on the all-time highest-paid athletes list.

Iron Mike made a load of money from punching people in the face, as well as several appearances for WWE. Though he has spent a lot of his money, his total career earnings are $685 million (£544 million).

Shaq is in the top half thanks to the alleged $700 million (£556 million) he made from shooting the hoops on top of various other projects.

It's no surprise to see that this hairstyle-changing, free-kick taking beautiful bloke is the highest-paid footballer of all-time. The Beckham brand is absolutely massive and his earnings are reportedly $730 million (£580 million).

The golfer's earnings stand at $760 million (£604 million) thanks to his five major championship wins, coupled with endorsement from giants such as Barclays and Rolex.

It's common knowledge that Floyd Mayweather Jr. quite likes money - it's his nickname after all and fair play to him, he's made a decent bit of cash over the years hasn't he? One of the biggest box office attractions, he has made $765 million (£608 million) in career earning and has remained undefeated while doing so.

He retired this year and it's fair to say that Bryant has made a fair bit of money in his 20-year career with LA Lakers. The 18-time All Star's career earnings are said to be around $770 million, which is roughly £612 million.

The Formule One hero made $1 billion (£794 million) over the years and topped the Forbes rich list for the world's highest-paid athletes two years on the trot in 1999 and 2000.

The 18-time major championship winner is said to have been responsible for the designing of 298 golf courses, which means the 76-year old's career earnings stand at $1.15 billion (£914 million).

The highest-paid golfer of all-time, Tiger Woods has raked in a reported $1.65 billion (£1.31 billion) in his career.

The highest-paid athlete of all-time is Michael Jordan. After stints with Chicago Bulls and Washington Wizards as well as the fact he has his own brand of trainers with Nike, Jordan is absolutely swimming in the money - he apparently collects $100 billion from Nike on a yearly basis and his total career earnings are $1.7 billion (£1.35 billion).